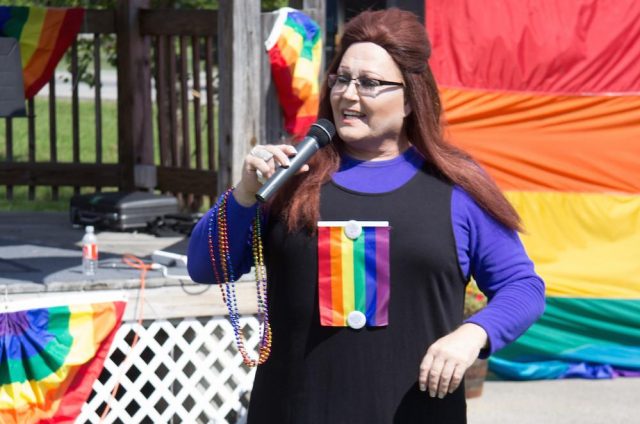 ‘I think it was probably the first time people had seen a drag show in their life,’ said the organiser.

Morehead, Kentucky, just held its first ever Pride celebration over the weekend but the person responsible for putting the city on the map wasn’t in the crowd.

Rowan County clerk Kim Davis gained international attention in August 2015 when she refused to issue marriage licenses to same-sex couples on the basis of her religion.

It was an act of defiance against the Supreme Court’s June 2015 marriage equality ruling.

She was consequently sued and jailed for contempt of court, but was released five days later.

David Moore, the executive director and lead organiser of Morehead Pride, told VICE that the controversy helped push the town’s residents to ‘decide where they stood on the issue of gay rights.’

Before, many’d rather keep their silence or sit on the fence, but the hoo-ha created by Davis had forced them to ask themselves whether they were allies or not to the LGBTQ community.

In place of Davis at the festival, a drag queen impersonating her showed up to entertain the attendees.

‘I think it was probably the first time people had seen a drag show in their life,’ said Moore.

Morehead Pride had around 50 vendors including nonprofits.
Moore told VICE that he had spent the past months going to pride festivals, handing out information, and recruiting LGBTQ vendors and allies.

In spring, he filed papers to incorporate Morehead Pride as a nonprofit dedicated to town’s LGBTQ community.

At the event, attendees not only saw performances by local drag artistes but also heard speeches from marriage plaintiffs and activists.

Head over to VICE for the full report.