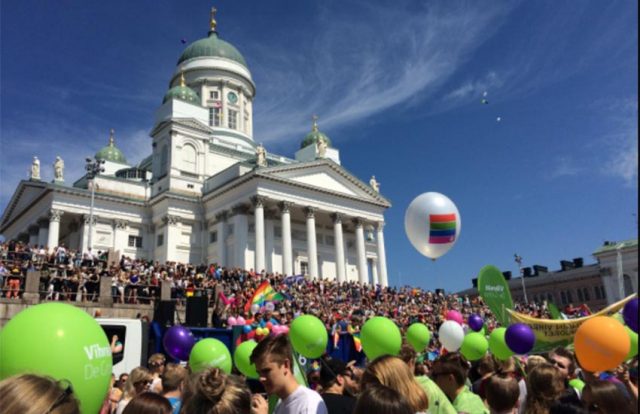 The Finnish government has stopped an initiative seeking to block marriage equality at the last minute.

On 1 March, Finland will become the last Scandinavian country to open marriage to same-sex couples.

Parliament had originally voted on marriage equality in November 2014.

It was a close vote, with 105 to 92 votes in support of same-sex marriage.

But an anti-gay petition led to a ballot measure, which forced

Parliament into debating – and voting on – the matter once more.
About 100,000 people had signed a petition by the ‘Association for the Real Marriage’, which is inspired by anti-gay French organization Manif pour Tous.

They thought after the last election in April 2015, which saw the power shift and a party formerly opposed to same-sex marriage gain ground, they would have a chance to stop the law.

So on Friday (17 February), less than two weeks before the law was set to come into force, MPs voted again.

And contrary to what the homophobes hoped to achieve, marriage equality received even more support than in 2014.

120 MPs voted in favor, with only 49 voting against; two members abstained and 29 people were absent.

A majority of those who voted against the new law are members of the right-wing Finns Party (Perussuomalaiset, formerly True Finns).

They hold 37 seats in parliament and support ‘traditional family values’.

Almost all MPs representing the Green League, the Left Alliance, and the Social Democrats voted in favor.

In the lead-up to the elections, prime minister Juha Sipilä had already announced he wouldn’t stop the law.

Since 2002, gay and lesbian couples can enter civil partnerships.
The introduction of same-sex marriage was delayed so all necessary follow-up changes to any other laws could be implemented first.