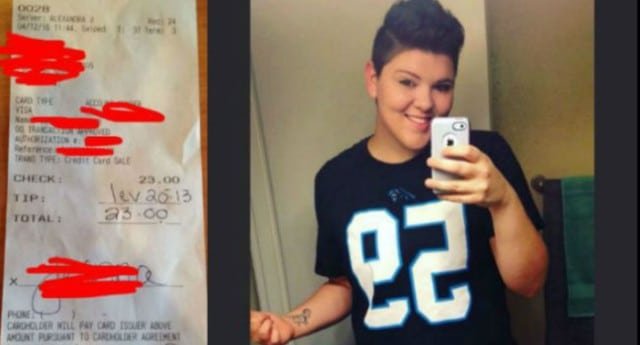 Experiencing hate and discrimination at your work place is one of the most unpleasant things. For this gay waitress in North Carolina, homophobia reached a point of human disrespect and hatred that left many of us wonder if these kinds of people will ever wake up from their wrong realities.

This group of homophobic diners expressed their lack of humanity by “tipping” Alexandra Judd a Leviticus Bible Verse. That is, instead of filling the gap on the bill with the value of the tip, they wrote: ‘lev 20:13’.

Leviticus 20:13 is a verse against homosexuality:  ‘If a man has sexual relations with a man as one does with a woman, it is an abomination. They are to be put to death; their blood will be on their own heads.’

Alexandra Judd told to WBTV-TV:  ‘I’ve heard of people leaving fake money, or writing funny stuff in the tip spot of a check.
‘But [I] never believed it would happen to me, in the way that it did.’

On the bottom of the bill, the homophobic clients also left a message saying: ‘Praying for you”.

‘I don’t care what anyone says, this is the most disrespectful thing you can. Don’t pray for me darling, I have everything I could possibly want and need in my life.