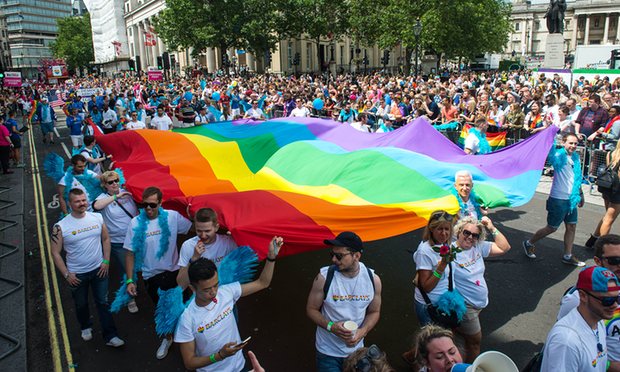 The number of homophobic attacks more than doubled in the three months after the Brexit vote, with toxicity fostered by the EU referendum debate spreading beyond race and religion, new figures suggest.

Hate crimes against lesbian, gay, bisexual and transgender (LGBT) people increased 147% during July, August and September compared to the same period last year, according to the LGBT anti-violence charity Galop.

Statistics from the police have already documented a spike of hate crimes against ethnic minorities and foreign nationals. Few analysts predicted a rise in hate crime based on victims’ sexual orientation, however. Galop gave support to 187 LGBT people who had suffered hate crimes in the three months that followed the referendum vote, compared with 72 in the same period in 2015. The rise is proportionately higher than other hate crime rises in the wake of Brexit .

More than 3,000 allegations of hate crimes were made to UK police, largely in the form of harassment and threats, in the week before and the week after the 23 June referendum vote, a year-on-year increase of 42%.

On Monday the Home Office will publish comprehensive hate crime reporting figures covering the year until April 2016, although sources say they will also include an addendum addressing the post-Brexit spike. The figures are also expected to focus on Scotland Yard’s progress in tackling disability hate crime.

The law creates a ‘hierarchy of hate crime’ and sends the message that some groups are more worthy of protection.

Nik Noone, Galop’s chief executive, said: “UK responses to hate crime are among the best in the world but our hate crime laws are far from perfect. The highest prison sentence a court can give for homophobic, transphobic or disability common assault is six months. That is just a quarter of the two-year maximum for race and faith common assault. This disparity needs redress.”

David Isaac, chair of the Equality and Human Rights Commission said: “Currently, the law and sentencing policy create a ‘hierarchy of hate crime’ and send the message that some groups are more worthy of protection than others. This undermines confidence of victims in the law – and may contribute to the huge levels of under–reporting in some communities. We call on the government to undertake a full-scale review of aggravated offences and sentencing provision.”

Four in five respondents to the Galop report, released today, say they have experienced hate crime. However, only a quarter reported the last hate crime they experienced, suggesting a gap in the data collected by police and government departments. The report, based on a survey of 467 LGBT people, shows low satisfaction with the police, with half of those who reported a hate crime to them feeling unsatisfied with the outcome.

A government spokesman said: “In a Britain that works for everyone, hatred against a person because of their sexual orientation will not be tolerated. We welcome Galop’s recognition that UK hate crime laws are among the best in the world, but there is more to be done – and the government’s hate crime action plan, published in July, included measures to encourage prosecutors to pursue tougher sentences for all hate crimes, including those targeting the LGBT community.”