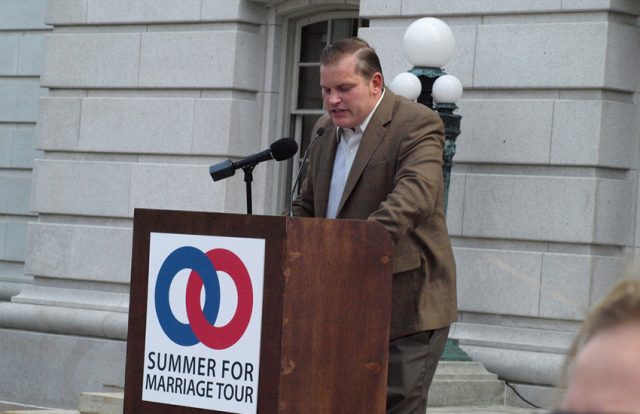 National Organization for Marriage are calling it a ‘bright and exciting time’.

Plans have been unveiled to undo nationwide marriage equality from the US’ largest homophobic group.

Less than two days after Donald Trump has become President-elect, National Organization for Marriage has revealed a four-step plan to ensure gay couples are stripped of their rights.

Calling it a ‘bright and exciting time for NOM’, they said they were fully committed to work with the new president to make their voice and views heard.

To overturn marriage equality, they want to ‘work with President Trump to nominate conservative justices’, who ‘adhere to the constitution’ for the Supreme Court.

‘Such justices will inevitably reverse the anti-constitutional ruling of the Supreme Court imposing same-sex “marriage” on the nation in the Obergefell decision,’ the plan states.

‘Because that decision lacked any basis in the constitution.’

They also want to overturn Barack Obama’s work to allow people to express their gender identity – something the NOM calls ‘illegal, overreaching executive orders and directives’.

Third on their list is the plan to reverse policies ‘that seek to coerce other countries into accepting same-sex “marriage” as a condition of receiving US assistance and aid.

‘It is fundamentally wrong for a president to become a lobbyist for the LGBT agenda,’ they say.

‘And we are confident that will end in the Trump administration.’

Described as ‘critical legislation to protect people who believe in marriage from being targeted by the government for persecution’, the Act would allow businesses to discriminate against LGBTI people if they cite religious reasons.