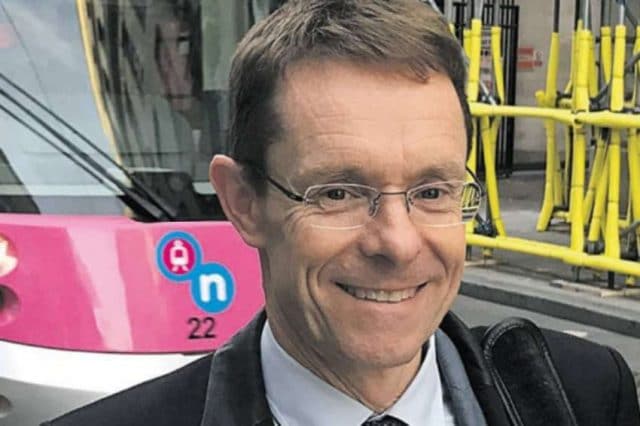 ‘Homophobic’ protests outside schools in Birmingham must ‘stop now’, the West Midlands mayor has said.

Andy Street, who is openly gay, said some of the materials distributed at protests had left him in ‘disbelief’.

Street was discussing the protests which have taken place outside Anderton Park Primary over the teaching of LGBTI-inclusivity lessons.

Numerous demonstrations have taken place outside several Birmingham schools since the beginning of the year.

Some local parents opposed to the classes have said that their children are too young to learn about LGBTI issues.

Street added that the government should strengthen its guidance for equality training.

The UK’s High Court recently . Organizers have pledged to fight the ban.

, Street he had thought homophobia had become a ‘non-issue’ in Birmingham prior to the protests.

However, the Conservative mayor said that he had been shocked by the content of materials distributed at the protests.

‘If you look at the literature and the banners, the first reaction is disbelief actually [that] it could be said in this day and age,’ he said.

‘You look at what’s being said and it’s really upsetting but it is actually ultimately homophobic and it is illegal and it has to stop now.’

While Street said it is ‘too simplistic just to see this as an LGBT issue’, he said there had been widespread misunderstandings that the classes were sex-education.

He emphasized that the classes were ‘teaching [that] society contains different types of people and mustn’t be too obsessed by the LGBT element of this debate because the principle at stake is much broader than that’.

Street also called out some of the protestors who did not have children at the school. This includes one of the lead protestors, Shakeel Afsar.

‘I hope that there will be discussion between the school and the parents of children in that school,’ he said. ‘One of the issues here has of course been that a lot of the demonstrators are not parents in that school.

‘Of course, I respect the right of parents to be deeply, deeply concerned about what happens in their children’s school, but this protest has been somewhat moved away from that.’

Street added that he thought the protests were ‘wrong’, and supported Birmingham council’s decision to secure an injunction.

‘We have worked hard over the last few weeks, patiently, quietly and behind the scenes, to defuse local tensions in Birmingham,’ he said.

Street said he would be meeting with officials from the Department of Education to discuss the issue.

Protests have been taking place outside of schools in Birmingham since January over the teaching of LGBTI-inclusivity lessons.

The protests were initially directed towards Parkfield Community School over their No Outsiders classes. No Outsiders taught classes about same-sex relationships and gender identity. The protests later spread to nearby schools with similar programs.

Protestors – who are mostly, but not exclusively, Muslim – have said that primary school children are too young to learn about LGBTI issues. Some have also claimed the lessons go against the teachings of Islam.

Several schools in the area put their LGBTI-inclusivity lessons on hold as a result.

The High Court banned protests outside immediately the schools last week. Anderton school’s headteacher spoke of her relief of the injunction. Sarah Hewitt-Clarkson described the disruption and fear that the protests had caused among staff and students.

However, since then around 40 people held a demonstration on an area of grass about 100m from the school, outside the injunction’s exclusion zone.

The injunction will be in place until Monday (10 June). Following this, those opposed to LGBTI-inclusivity lessons will have their chance to present their case to a judge.