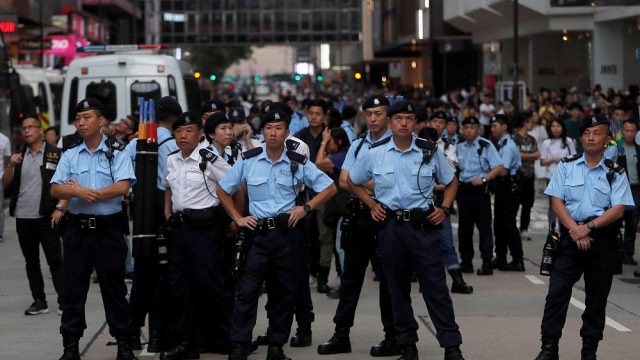 Hong Kong police locked down the city centre on Sunday as it braced for yet another mass protest over an extradition bill that has plunged the Chinese-ruled financial hub into crisis and triggered violent clashes.

Tens of thousands are due to march from Victoria Park in the bustling shopping district of Causeway Bay to Wan Chai, just one metro station away, after police shortened the route, citing safety concerns.

Rally organisers lost their appeal to have the march route end in Central district, close to the scene where police in June fired rubber bullets and tear gas to disperse activists in some of the most violent protests to rock the former British colony in decades.

The protest comes a day after tens of thousands gathered to voice support for the police and call for an end to the violence.

Hong Kong is on edge after a series of skirmishes between activists and police at a wave of recent rallies that have extended across the territory.

Police late on Friday seized a cache of explosives and weapons in an industrial building in the New Territories district of Tsuen Wan. Three people were arrested in connection with the seizure, which police described as the largest ever of its kind in Hong Kong.

They said it was unclear if the explosives were related to the protest.

Government and police headquarters, which have been targeted by protesters in previous rallies, were barricaded by massive water barriers, while media said 5,000 police were being deployed for the rally, which is due to start at 0700 GMT.

Several major roads were closed off and global bank HSBC, in a rare move, pulled down large metal barriers on the street level of its skyscraper building.

Hong Kong’s embattled leader, Carrie Lam, has apologised for the turmoil the extradition bill has caused and declared it “dead”. Opponents say nothing short of its full withdrawal will do.

Under the terms of the handover from Britain in 1997, Hong Kong was allowed to retain extensive freedoms not enjoyed on the mainland under a “one country, two systems” formula, including an independent judiciary and right to protest.

But for many Hong Kong residents, the extradition bill, which would allow extraditions to China and which they fear could be used to silence dissent, is the latest step in a relentless march towards mainland control.

The protesters are also demanding an independent investigation into what they describe as excessive use of force by police, the withdrawal of word “riot” from the government’s description of the demonstrations and the unconditional release of those arrested.