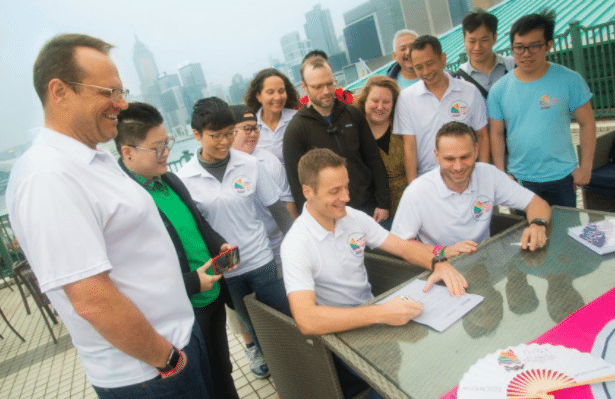 Hong Kong right to host the 2022 Gay Games has officially been sealed as its bidding committed signed the License Agreement with the Federation of Gay Games.

Signing the agreement marks the official start for the preparation of Hong Kong’s Gay Games.

The 9-day event will run in November 2022. It is expected to attract more than 15,000 participants and inject about US$130 million into the local economy.

Representatives from Hong Kong’s bidding team came together to sign the official agreement.

‘After the announcement of our win in October, the Gay Games Hong Kong team worked hand-in-hand with the Federation of Gay Games and our legal partner Linklaters to finalise the 42 pages License Agreement in order to bring the best possible Gay Games,’ said Hong Kong 2022 chair, Dennis Philipse.

‘Together with the Federation of Gay Games, we have big plans to ensure the event will become a trailblazer for increased progress in diversity and inclusion in the world’s most populous region.

‘Our next steps are to help with the success of the next Gay Games in Paris and to continue conversations with the Hong Kong SAR Government, sport associations and sponsors.’

The team now has 1,748 to bring together the world’s biggest LGBTI sporting and cultural event.

But the Federation of Gay Games – the international governing organization of the Gay Games – have every confidence the team can pull of a great event.