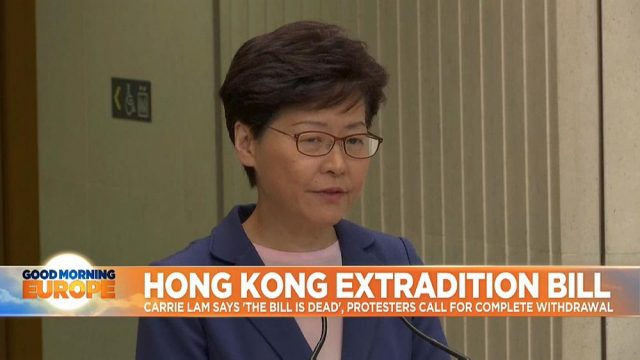 Chief Executive Carrie Lam went on television on Tuesday to announce there were no plans to reintroduce the polemic bill that would have allowed extraditions to mainland China. She said her government’s work on it had been a “total failure” so far.

However, she stopped short of saying it had been withdrawn completely.

The planned bill sparked a huge wave of protests in the last few months in the former British colony, which is now part of China but is supposed to enjoy a level of autonomy from the communist country.

On June 18, Lam apologised publicly in an attempt to put an end to the protests. She announced the suspension of the bill, but that move failed to convince her critics who continued to demonstrate against the planned legislation and called for Lam’s resignation.

Then, on July 1, it is believed more than one million people demonstrated against the bill in Hong Kong.

In today’s announcement, Lam said she understood there are still lingering doubts about the “government’s integrity on the matter”.

She went on to say there are no plans to re-introduce the planned legislation in the future and that “the bill is dead”.

But protesters were quick to pick up on Lam’s use of language. They said Lam still refuses to completely withdraw the bill and that did she not say the legislation would be completely scrapped in the future.

They went on to say that in Hong Kong’s legislative procedures the word “dead” does not apply to legal proceedings.

They added “If she still insists on this sort of attitude… we will anticipate more people will come to the streets and demand democracy in Hong Kong”.

Watch Good Morning Europe’s report on the latest in Hong Kong in the video player above.