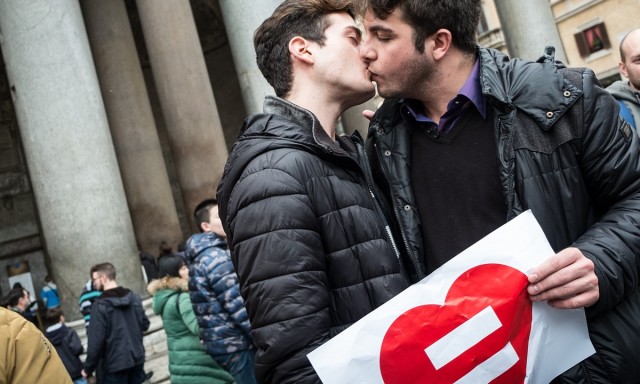 Yesterday, Italy’s Parliament has finally passed the bill that allows same-sex couples to legalize their union, with 369 votes vs 193. Despite the opposition of the Catholic Church, Italian Prime Minister Matteo Renzi has been a fierce supporter of the bill and helped it pass.

Now, same-sex couples in Italy can legalize their partnerships, yet religious same-sex unions are still banned even for denominations who are supportive of the LGBT community. The law will allow same-sex parenting and adoption.

To celebrate the victorious event, local administration has lit a rainbow at Rome’s Trevi Fountain.

The bill was approved in February after The European Court of Human Rights upheld complaints of discrimination and was approved yesterday by Italy’s Parliament, against the voices of disapproval coming from Vatican.

The reactions from Vatican were vehement. Catholic leader Archbishop Michele Pennisi attacked the law saying that it will affect the future society.

Forte said: “On the Church’s part, there will always remain the proclaiming of the Gospel of the family as a fundamental institute of human, social and Christian life.”

However, negative reactions from the Church did not stay in the way of LGBT’s community joy to finally have same rights as other Italian citizens.

Italy was the last country in western Europe without a law to protect the civil rights of same-sex couples. Despite the position of Catholic Church, the Government approved same-sex civil unions in Italy, offering lesbian and gay couples legal protection.