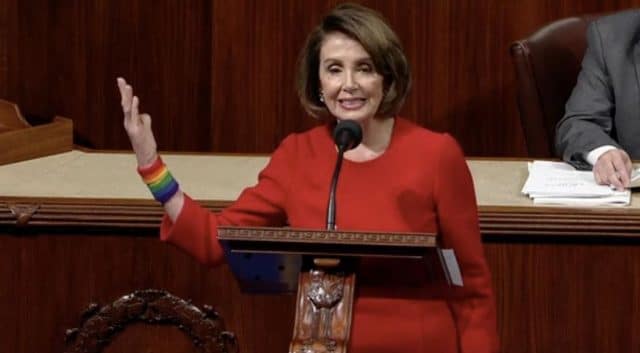 The US House of Representatives on Friday passed the Equality Act, the nation’s most comprehensive bill to protect LGBTQ people from discrimination in housing, the workplace, public accommodations, and other settings.

The bill, first introduced in 2015, passed the House in a 236-173 vote led by Democrats. Eight House Republicans voted for the bill.

“No one should lose their job because of who they are or who they love,” House Speaker Nancy Pelosi said in a floor speech.

She continued: “Today, and for all days, we say to all of our friends: We see you, we support you, we stand with you with pride. This is progress for America.”

For too long, conversations surrounding America’s LGBTQ community have focused on “tolerance.”

But tolerance is a condescending word.

As we pass the #EqualityAct today, we take pride in this community and all they have & will achieve. pic.twitter.com/I53StyYFxK

The Equality Act faces tough odds in the Senate, which is controlled by Republicans who generally oppose expanding LGBTQ rights. The bill is widely expected to die without a vote, reports Buzzfeed.

“At the moment,” a spokesperson for Senate Majority Leader Mitch McConnell told BuzzFeed News on Thursday, “I have no scheduling announcements regarding Senate action.”

Hardline conservative commentators claimed the bill will “unleash federal persecution of Christians,” lead to the nation’s downfall, and make the lord “vomit you out.”

“It would allow the government to force its rigid and unyielding fist inside the church,” said Republican Rep. Ross Spano of Florida.

The Equality Act is very popular among the American public.

The Public Religion Research Institute found in 2017 that a majority of people in every state support laws protecting LGBTQ people from discrimination in jobs, housing, and public accommodations. The survey found that 70% of Americans support comprehensive LGBT nondiscrimination laws, though 39% also supported laws banning transgender people from restrooms that match their gender identity.

The Human Rights Campaign hailed the historic passage of the Equality Act on Friday.

“Today’s historic vote is a major milestone for equality and sends a powerful and profound message to LGBTQ people, especially LGBTQ youth, that the U.S. House has their backs,” said HRC President Chad Griffin. “No one’s rights should depend on which side of a state or city line they live on, and today we took a giant step forward in our journey toward full equality. This historic victory would not have been possible without the millions of LGBTQ people and our allies who organized, mobilized and turned out to elect a pro-equality majority in 2018. Now, we will take our fight to the U.S. Senate and turn up the pressure on Leader McConnell to allow a vote on this crucial legislation. And we won’t slow down in working to turn out the 10 million eligible LGBTQ voters and our millions more allies to elect a pro-equality president in 2020 who will sign the Equality Act into law.”