“The policies that we’re seeing that are still in place continue to be gendered, and that’s really problematic.”

While American businesses have made strides in improving parental-leave policies, many still reinforce the stereotype that parenting is woman’s work. That can leave gay men in dire straits if they decide to start a family.

Many gay dads are forced to use workarounds—like saving up sick time and vacation days, using unpaid time off—to care for a new baby. Surrogacy and adoption, the usual routes to parenthood for gay men, are expensive, meaning gay fathers have less available income to support unpaid time off. 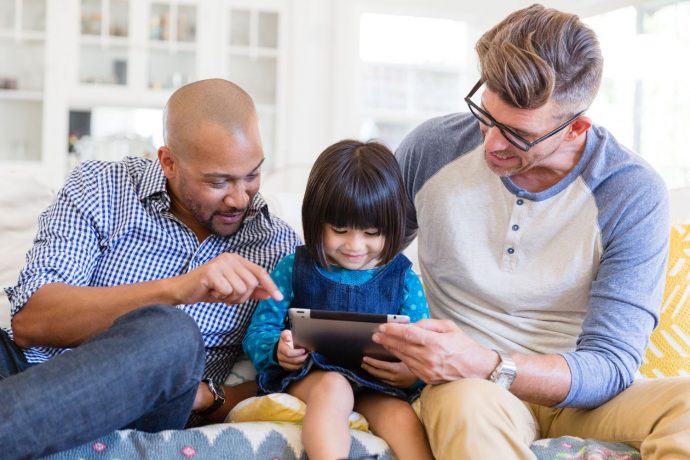 “The transition of parenthood can look really, really different for [gay dads],” Abbie Goldberg, a psychology professor at Clark University tells the Chicago Tribune. “The policies that we’re seeing that are still in place continue to be gendered, and that’s really problematic.”

The adoption process is unpredictable, making it difficult to plan ahead with employers. And gay dads are more likely to adopt older kids, who may need as much time for parental bonding as infants.

“There’s trust issues, or someone’s been hopping around from foster home to foster home,” LGBT parenting expert Eric Rosswood tells the Tribune. “They may be thinking, ’I’m not going to be here for very long until I go on to the next home.’”

Gay dads, both solo and coupled, are making do. But more often than not, they have a lot fewer of the resources available to other parents—especially if their families aren’t supportive. (Grandparents and other relatives are often a major part of new parents’ support system.)

“Even when paternity leave or non-gendered leave policies are available, sometimes they’re just there as a formality,” Holning Lau, professor of law at the University of North Carolina, tells NewNowNext.

Lau’s research focuses on how public policy and social norms discourage fathers from being hands-on caregivers.

“Sometimes parental leave is technically available but, for men especially, it isn’t easy to take without being looked down upon by others in the office, including supervisors,” he says. Like women, men who do take parental leave face negative career consequences, which may be a reason why places with paternity leave often see low participation levels.

When Lau’s adopted daughter was born three-and-a-half-years ago, UNC provided a full semester off for parental leave. He was also able to take another semester of research leave. At the time, his husband’s employer didn’t offer any form of paid parental leave to dads, so Lau’s generous policy was a godsend. 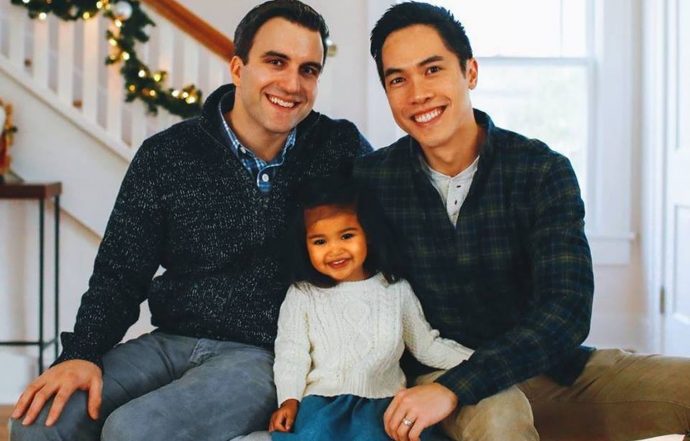 “I was so fortunate to be able to stay home with my daughter,” he says. “That time with her was so special and wonderful for me — it was just incomparable. It was absolutely one of the best things I’ve ever done, and I wouldn’t trade that time for anything in the world.”

In some cases, gender-specific leave policies are in violation of federal law, and there have been successful lawsuits that have changed them.

“It’s legal for an employer to treat men and women differently if it’s based on medically recovering from pregnancy and childbirth,” Lau explains. “But if employer is giving women additional leave that includes time for childcare and bonding, they must offer the same amount of time to men or they’re in violation of Title VII of the Civil Rights Act.”

Under the 1993 Family Medical Leave Act, workers are entitled to up to 12 weeks of job-protected, unpaid leave. But 40% of U.S. workers don’t meet the requirements for FMLA. And many who do can’t afford to take unpaid time off. 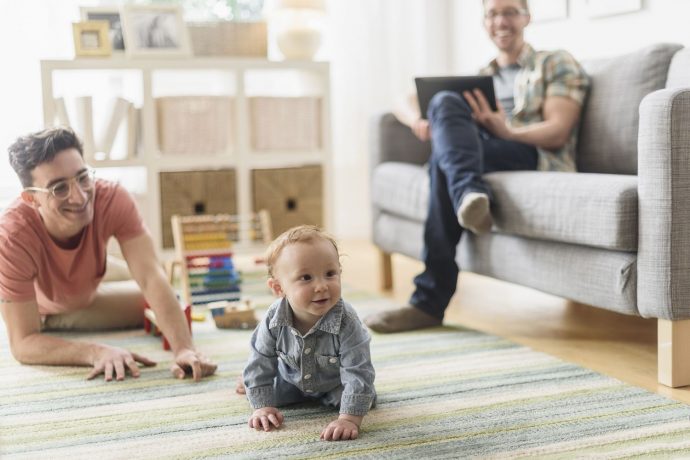 Only 12% of private sector U.S. workers get paid family leave through their employers, according to the Department of Labor. Of those companies, just a fraction offer paternity leave—and adoptive parents are frequently left out of the equation entirely. Only four states—California, Rhode Island, New Jersey, and New York—have some form of mandatory paternity leave in place.

Non-gendered parental leave policies are critical, not only for gay dads, but all parents—and for all the kids in this country who are desperately in need of homes. LGBT families include an estimated 22,000 adopted children and 3,400 foster kids. Same-sex couples are four times more likely to be raising an adopted child than straight couples, and six times more likely to be raising foster children.

At least 84 countries now offer paid paternity leave in addition to maternity leave, but the U.S. remains the only industrialized nation without any form of legally mandated paid family leave.

“Gay dads are uniquely affected by this,” says Lau. “But gender stereotypes that say women are better suited to be caregivers both in our culture and in our parental leave policies are detrimental to all men, women and families in the U.S.”