Home Gay Life How To Tell Whether A Dude Is A Top Or A Bottom,... 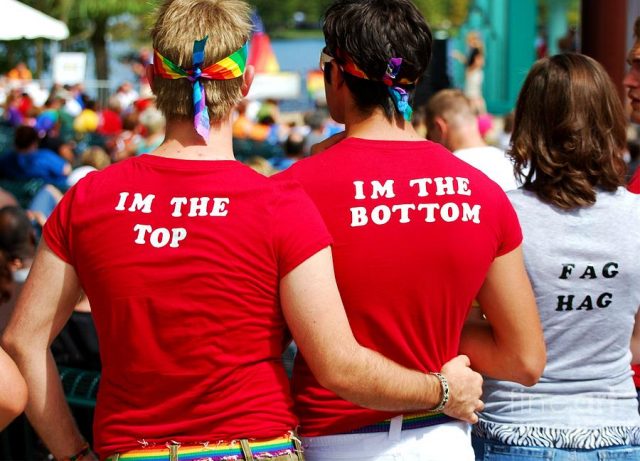 Can you tell if a guy is a top or a bottom just by looking at him? A new article by Brian Moylan at Vice aims to find the answer to this controversial question.

Moylan points to a 2013 study in the Archives of Sexual Behavior that found people often rely on male-female gender stereotypes when identifying sexual roles in same-sex relationships.

For the study, 23 participants were shown the dating profile pics of 200 gay men, 100 tops and 100 bottoms, then asked to identify which was which. Based on the pictures alone, participants correctly identified the tops about 65 percent of the time and the bottoms just about 39 percent of the day, bringing the overall average correct guesses to 52 percent.

Dr. Nicholas O. Rule, who led the study, said the results primarily had to do with “heterosexually-inspired stereotypes about men” or biological indicators of masculinity, like a man’s level of hairiness, size of muscles, or squareness of jaw.

Moylan also looks at a 2011 study by Chinese and Canadian researchers Lijun Zheng, Trevor Adam Hart, and Yong Zheng that found it’s not just a man’s physical appearance that canreveal his preferred sexual position. His mannerisms also play a factor.

Interestingly, in a separate study by the same research team, bottoms demonstrated a greater interest in faces of men considered to be traditionally masculine, while tops were more interested in traditionally feminine faces.

So what’s the takeaway from all this?

“One hypothesis is there are biological differences between tops and bottoms, and that’s a possibility, but we don’t have any evidence to support it,” Hart explains.

At the end of the day, trying to guess whether a guy is a top of a bottom based on his physical appearance, his mannerisms, or his interests is a total crap shoot.

“There are a lot of tops that are feminine and bottoms that are masculine,” Hart continues, adding that most guys aren’t exclusively one position or another, even though they may gravitate towards one in particular.

Moylan offers this pearl of wisdom for those who are really curious: “If you’re getting close enough to a guy where it’s really going to matter, you might have to figure it out the old fashioned way: Ask.”