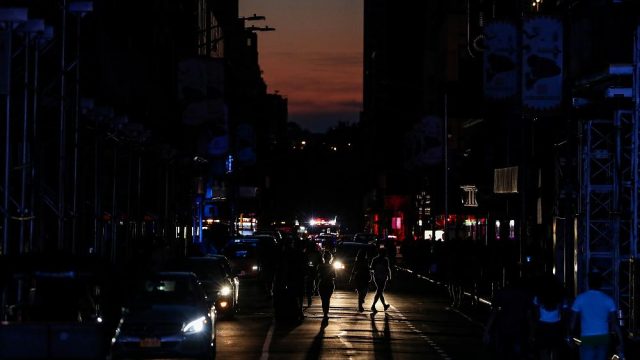 A massive power cut crippled the tourist-filled heart of Manhattan for several hours on Saturday, sending theater-goers spilling into the streets, knocking out Times Square’s towering electronic screens and bringing subway lines to a near halt.

The New York City Fire Department said a transformer fire affected hundreds of thousands of customers along a 30-block stretch from Times Square to about 72nd Street and Broadway.

Power went out at much of Rockefeller Center, reaching the Upper West Side and knocking out traffic lights.

A big cheer went up among Upper West Side residents when power flickered back on.

Police directed traffic at junctions and pedestrians and bikes weaved through the dark.

The power cut on the anniversary of a huge 1977 outage that left most of the city without power.

Con Edison CEO John McAvoy told reporters that summer warmth, which can overload power grids with energy demand, was not the source of the outage.

Gov. Andrew Cuomo said in a statement that, although no injuries were reported, “the fact that it happened at all is unacceptable.” He said the state Department of Public Service will investigate.

“You just can’t have a power outage of this magnitude in this city” Cuomo said. “It is too dangerous, the potential for public safety risk and chaos is too high, we just can’t have a system that does that, it’s that simple at the end of the day.”

Most Broadway musicals and plays canceled their Saturday evening shows, including “Hadestown,” which last month won the Tony Award for best musical. Several cast members from the musical “Come From Away” held an impromptu performance in the street outside the theater for disappointed audience members.

Emily Totero, 30, planned to bring out-of-town guests to see “Moulin Rouge.” But once they got to the theater district, they saw the power go out.

“You could see all the theater lights across the street, all the marquees went out. That’s what we noticed first,” she said.

The outage also hit Madison Square Garden, where Jennifer Lopez was performing Saturday night. Attendees said the concert went dark about 9:30 p.m. in the middle of Lopez’s fourth song of the night. The arena was later evacuated. And at Penn Station, officials were using backup generators to keep the lights on.

But he said train operators were able to manually change the signals and bring at least one car into stations so passengers could get off.