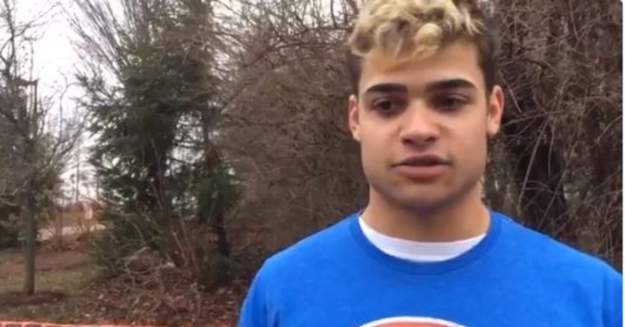 Jake Bain, an openly gay football star at John Burroughs High School, received tons of support from his family, friends and community this morning as Westboro Baptist Church descended onto their town to once again do another homophobic-filled hate protest.

Hundreds of people lined the streets to support one of their own, as they waved the rainbow flag and sported a ton of fantastic signs to let him know that they have his back no matter what Westboro or anyone decides to do.

So many people showed up today to #StandWithJBS #StandWithJake. I have been to a lot of rallies, this one probably warmed my heart the most. This youth is going to change our world. pic.twitter.com/GxrgEeKsyR

So proud every day to be a parent @JBSchool for so many reasons. Today’s reason is #StandWithJake

This morning in Ladue was amazing, so much love and support. The businesses in Ladue even had rainbow flags and supportive signs. #StandWithJake #StandWithJBS pic.twitter.com/aY1ooXUVKf

Jake spoke with a local news affiliate about how overwhelmed and happy he is about all the support he’s received since word got out that Westboro was planning this rally. “We’ve had such an a great support system through all of this,” Jake exclaimed to KSDK. “As soon as people found out that these people were coming and protesting, there was already hundreds of people that were sending me messages, sending me tweets and stuff, just showing the support. From the bottom of my heart, I just want to thank everybody for showing the support this time.”