Home Gay Stars Ian McKellen called on all actors to leave their closets and come... 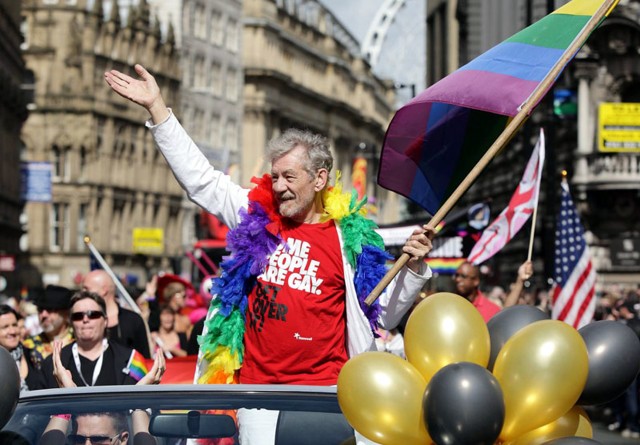 “Make a coming out and be yourselves,” – said the famous actor of such well known films as “Lord of the Rings”, “Hobbit” and “X-Men” who ardently supports the LGBT movement, took part in the Gay Pride and even claimed the whole world to be gay himself.

Sir Ian McKellen encourages all actors to make the mass coming out, because it is no longer considered as a career-killer. 76-year-old British actor came out during his speech on the radio in 1988. Later, he said that this action did not prevent his career success, but it actually boosted it. “It all happened after coming out! I had no idea this silly thing was a weight on my shoulders.”
“That’s my message to anyone in this town who thinks ‘I’ve got to stay in the closet to be successful in films’… I didn’t! ” He also added: “Do you want to be a famous movie star who has love scenes with ladies and in private be an unhappy gay? ” “There’s no choice. Forget the career, dear. Go and do something else”.

“A closet’s a really nasty place to live, you know? It’s dirty, it’s dusty, it’s full of skeletons. You don’t want it. Open that door — fling it wide and be yourself.”

So maybe it is the right time to claim who you really are. Hundreds of famous actors, singers and even political figures have done it already. Why do you still hide in the closet? The time for action has come. Do it, don’t hesitate, be proud of your choice and never blame yourself for doing something wrong!