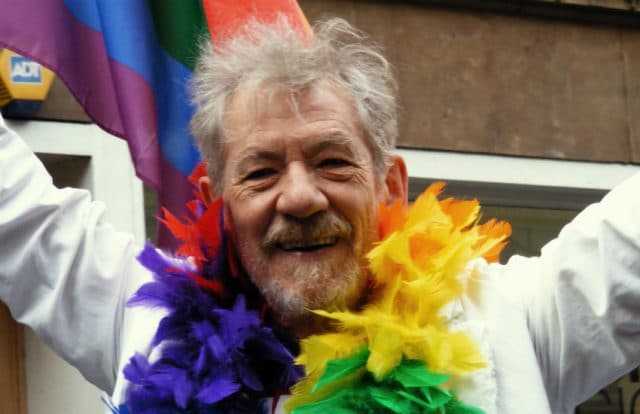 Legendary Lord Of The Rings actor Ian McKellen has launched a programme to support gay, lesbian, bisexual and trans people over 50.

The English thespian has teamed up with British charity LGBT Foundation to create Pride in Ageing.

‘No one is born with prejudice, it’s something you learn,’ McKellen said at the event.

‘Growing up, even in Lancashire, what is now Greater Manchester, 70 years ago, it was a total silence.’

He furthermore added: ‘There was no mention of sexuality other than heterosexuality at school, on the radio, in church. Absolute silence. So is it any wonder that people who are older, when things are hazy, they may think back to a time when things were different?’

‘Waving the banner for full and total equality, and love, is something that has my total support,’ he added.

Pride in Ageing will work to end the inequalities faced by lesbian, gay, bisexual and trans people over 50 in Greater Manchester and ensure that they have access to inclusive housing and care later in life.

The programme will also tackle the social isolation faced by LGBTI people over 50 in the UK, which ends up having a significant impact on their health, happiness and wellbeing.

Moreover, it will also celebrate the positive aspects of being an LGBTI person in mid-to-later life. The aim is to bring people together to share their stories and experiences, and building an active, empowered community.

‘We know that LGBT people over 50 are at a much higher risk of isolation and are under-recognised in health and social care services, and may be facing discrimination due to their sexual orientation or gender identity.

‘We believe that all LGBT people over 50 have the right to an excellent quality of life in later years, and look forward to working to end the many inequalities that LGBT in mid-to-later life face.’

The annual LGBTI Founders Day focused on gay, lesbian, bi and trans icons over 50 and their victories as well as their struggles.

Beloved TV presenter was the keynote speaker for the event. She pointed out that although we’ve come a long way in terms of rights there ‘was still a long way to go’.

Watch her speech in full below