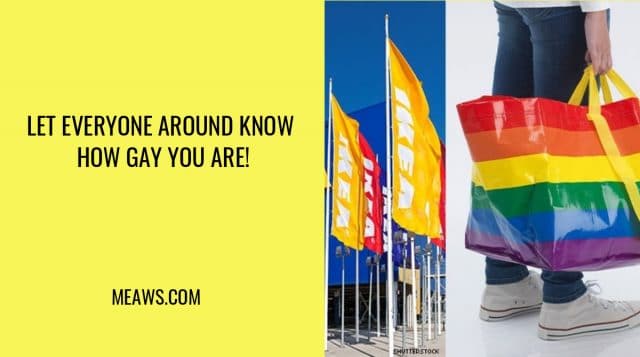 Now your entire laundromat will know how gay you are.

What does it mean to queer a space? To make something queer? Does just the mere presence of a queer person make a space non-straight? Contemplate these questions and more as you schlep your laundry to the laundromat in this rainbow-colored IKEA bag!

IKEA announced that it is partnering with the Human Rights Campaign Foundation to celebrate LGBTQ+ Pride Month with a rainbow-colored, limited-edition KVANTING shopping bag. If you purchase the bag for $3.99, 100% of the profits go to HRCF’s programs supporting LGTBQ+ children and families.

“We are excited to partner with the Human Rights Campaign Foundation for Pride Month,” Rafael Fantauzzi, IKEA U.S.’s diversity & inclusion manager, said in a statement “At IKEA, our culture is centered on the value of togetherness. We believe equality is a fundamental human right and that all homes are created equal. We know everyone deserves a home you absolutely love and a workplace where you can be yourself. To further show our commitment to equality and LGBTQ+ inclusion, on June 1, our co-workers will hoist the Pride Rainbow flag at all IKEA locations.”

HRCF is the educational arm of the Human Rights Campaign (HRC), a leading LGBTQ+ rights organization.

Gays and IKEA have always been a natural fit. On season 10 of RuPaul’s Drag Race, queen Asia O’Hara crafted a dandelion look for the “Hats Incredible!” runway that included a headpiece made with an IKEA lamp shade. And after Balenciaga made a bag referencing the iconic blue IKEA bags, designer Andi Wardrobe crafted both IKEA couture dresses and a jockstrap.