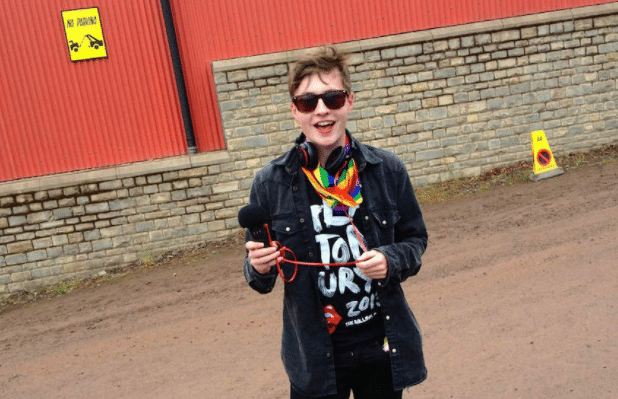 A young gay man suffering from ‘internalized homophobia,’ has opened up about his story.

Sean is perfectly OK with his sexuality, but wants to know why so many in LGBTI community have to act ‘so queer.’

In a new episode of the #QueerAF podcast, Sean explains the incredible shame he feels about being gay:

‘I was angry at a lot of gay men for feeding stereotypes. I’d say things like why are you a burden on the rest of us? I kept trying to mold people into what they I thought they should be.’

Sean finds this feeling ‘exhausting.’ So in an attempt to overcome it, he spoke to author Matthew Todd. He’s just released a paperback of his acclaimed book Straight Jacket which explores the concept of internalized homophobia.

On the podcast, Todd describes internalized homophobia as not feeling very good about yourself.

His book says it all comes from LGBTI people growing up in a world that says we are is not OK. Or in the worst cases, that being gay is even ‘a threat to our existence’ tying into our sense of survival. This fear gets internalized into complicated emotions that stay with us as we grow up.

But for Sean, and many others like him, he has been turning this homophobia onto other LGBTI people.

‘There’s a narrative that because so many young people are out and visible, especially online, that they don’t have any difficulties with self-acceptance or self-esteem,’ Todd tells Gay Star News.

‘But that’s what the generation above mine thought, too. Dealing with the legacy of societies gay shame and how it affects so many of us is something we need to focus on. I thought Sean was really brave to talk so openly. It’s where we need to head next.’

Listen to Sean’s empowering journey, where he learns to embrace both his sexuality and the ‘queerness’ of the LGBTI community now:

Held on Thursdays at London’s gay club Heaven, contestants dance and strip in front of a gawking audience screaming along. Overwhelmed by the experience, he left the club confused and struggling:

‘Is this what it means to be gay? Getting drunk and wolf whistling at naked guys? Not only am I uncomfortable with my sexuality, now I have this whole body image to live up to as well.’

But the therapist countered this, helping him to understand that came from within:

‘There are a lot of wide differences and depth between people in the LGBT community. And what you can learn is that these stereotypes of being effeminate of very muscular – you can decide where you relate. We talk about authenticity and that’s about accepting you to be you.’

But this all helped Sean to understand why he was pushing his own issue with being gay, onto others:

‘Now I understand this is called horizontal oppression. Its a form of denial from someone unable to accept who they are. When I have a prejudice towards other gay men, it’s not because I was uncomfortable with them – I am uncomfortable with myself.’