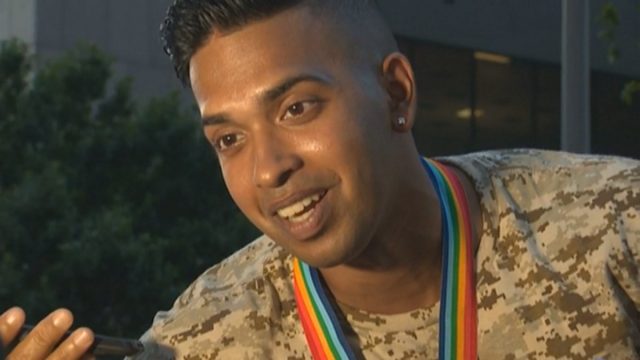 Imran Yousuf put his own life in danger to save clubbers from Omar Mateen’s rampage.

They don’t come much braver than former U.S. soldier Imran Yousuf. On the night of the Orlando Massacre in June, up to 70 lives were saved from terrorist Omar Mateen – and each of those survivors have Imran’s quick-thinking to thank.

In an interview with The Advocate, Imran, who was working on the club’s door the night Omar Mateen claimed 53 lives. According to the Advocate, he was toward the rear of the club when he heard gunfire, which he recognized from his experience fighting in Afghanistan.

“Time slowed down,” Yousuf explained. “The only difference was that I was surprised for a minute, because I knew this wasn’t a battleground. I heard that sound, that ‘bap-bap-bap.’ I know what follows that sound. I know what happens next.

“But I wasn’t the only one who had to survive,” he said. “Everyone sardine-packed into a back corridor where I was, and then they froze.”

He deduced that the gunfire was coming from the front of the club. Realising he only had moments until dozens of clubbers, who had unwittingly blocked themselves from their only exit, would be killed if nothing was done, he sprung into action.

“You could see in people’s eyes that they had kind of given up. Part of them was saying, ‘Well, this is the end right here.’

“An instinct inside of me kicked in that said, ‘Well, if you’re going to get killed anyway, you might as well make an effort. There’s definitely a door over there. If I can somehow get to it, I can kick it open, and maybe some of us can get out.’”

Then, he broke through the crowd, exposing himself to Mateen and putting his life in considerable danger, and swung wide open to safety. He yelled, “Go! go! go!”

In September, Yousuf was honoured by the American Military Partner Association for his bravery. but for him there was no question about whether or not to risk life and limb to save others. He told the Advocate: “an instinct inside of me kicked in that said, ‘Well, if you’re going to get killed anyway, you might as well make an effort.”