In a breakout performance, the daughter of a black father from Jamaica and an Indian mother was at the center of several heated exchanges during the second night of debates among Democrats vying for the right to challenge Republican President Donald Trump in the 2020 election.

Harris said the issue of race was deeply personal for her. She noted she was bused to school as part of integration efforts in California, and she questioned Biden’s 1970s opposition to school busing.

The former prosecutor looked straight at Biden and demanded that he explain himself.

“I do not believe you are a racist. And I agree with you when you commit yourself to the importance of finding common ground,” said Harris, 54, a U.S. senator from California who has ranked fourth or fifth in most national polls among Democrats.

“But I also believe – and it’s personal and it was hurtful to hear you talk about the reputations of two United States senators who built their reputations and career on the segregation of race in this country.”

Biden, who was on the defensive throughout the night, has faced heavy criticism for his recent comments that he worked decades ago with two Southern segregationist senators as a way to get things done in the U.S. Senate.

He appeared shaken by the attack, but defended his record on civil rights and said his remarks had been mischaracterized as praise for racists.

“If we want to have this campaign litigated on who supports civil rights and whether I did or not, I’m happy to do that,” he said, noting he had only opposed busing for school integration ordered by the federal government, not by local governments.

“Everything I have done in my career, I ran because of civil rights and continue to think we have to make fundamental changes,” he said.

He added a dig at Harris, noting he had been a public defender and “didn’t become a prosecutor.”

One of the lesser-known candidates, U.S. Representative Eric Swalwell, 38, also took a swing at Biden, sharply reminding voters of Biden’s age and urging the 76-year-old to pass the torch to younger candidates.

“He was right when he said that 32 years ago. He is still right today,” Swalwell said.

Biden responded: “I’m still holding onto that torch. I want to make it clear.”

In a Democratic contest where racial issues have figured prominently, Mayor Pete Buttigieg of South Bend, Indiana, also faced pointed questions about accusations of racism inside his city’s predominantly white police force after a fatal police shooting of a black man.

The contenders frequently attacked Trump and sharply disagreed over the best way to boost access to healthcare insurance coverage. Biden and the candidate running second in polls among Democrats, Bernie Sanders, turned their fire on Trump repeatedly.

Biden, the former vice president making his third run for the White House, said Trump’s tax cuts for the wealthy and other economic policies were increasing economic inequality in the United States.

“Donald Trump has put us in a horrible situation. We do have enormous income inequality,” Biden said. “The one thing I agree on is we can make massive cuts in the $1.6 trillion in tax loopholes out there, and I would be going about eliminating Donald Trump’s tax cuts for the wealthy.”

Like the Democrats who debated on Wednesday, the contenders disagreed on the best way to expand healthcare coverage. Asked who would back a plan that eliminated private insurance, only Sanders and Harris raised their hands.

When asked if their administrations would support covering healthcare for immigrants in the United States illegally, all 10 candidates on the stage raised their hands.

Trump, who has made cracking down on illegal immigration a signature policy of his presidency, pounced via Twitter even though he is in Japan for the G20 summit.

“All Democrats just raised their hands for giving millions of illegal aliens unlimited healthcare. How about taking care of American Citizens first!? That’s the end of that race!” the Republican tweeted.

The Democrats frequently talked over one another, shouting to get their points across as some of the lesser-known contenders tried to get noticed. At one point, Harris stepped in. 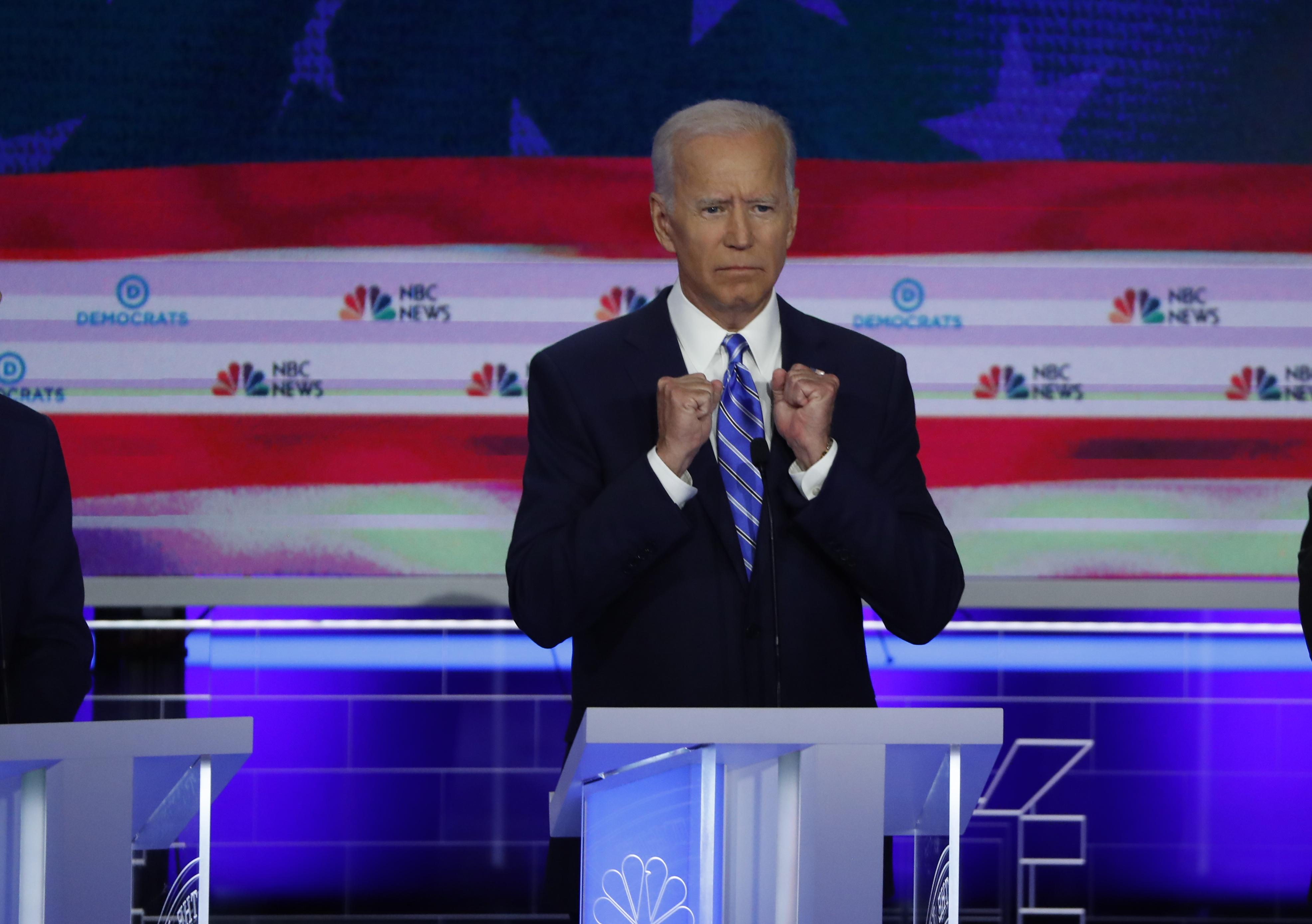 “America does not want to witness a food fight. They want to know how we’re going to put food on their table,” Harris said, drawing applause from Biden.

Buttigieg faced his own questions about the turmoil in his hometown of South Bend after the police shooting in South Bend earlier this month. He acknowledged that his police force lacked diversity because he “couldn’t get it done.”

Buttigieg said the situation around the shooting was a “mess” because the officer did not have his body camera on.