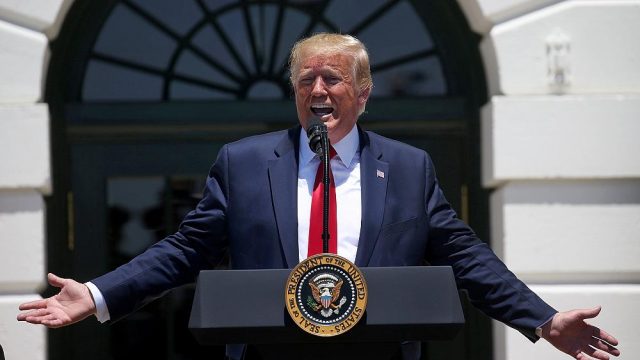 Some Republicans who typically keep tight-lipped about President Donald Trump’s tweeter habits spoke out on Monday about his incendiary comments attacking four Democratic congresswomen, saying he crossed a line.

“There is no excuse for the president’s spiteful comments — they were absolutely unacceptable and this needs to stop,” Sen. Lisa Murkowski, R-Alaska, tweeted.

“That’s not something I would say, and I think it’s divisive, unnecessary and wrong,” Portman said.

Trump had tweeted on Sunday that the Reps. Rashida Tlaib of Michigan, Ilhan Omar of Minnesota, Alexandria Ocasio-Cortez of New York and Ayanna Pressley of Massachusetts should “go back” to the “totally broken and crime infested places from which they came.” On Monday, he continued the attack, saying the four women of color “are people who in my opinion hate our country.”

Republican Rep. Will Hurd of Texas told CNN the comments are “racist and xenophobic. They’re also inaccurate, right? The four women he’s referring to are actually citizens of the United States. Three of the four were born here. It’s also behavior that’s unbecoming of the leader of the free world. He should be talking about things that unite us, not divides us.”

“While you had a civil war going on between the Democratic party, between the far left and the rest of the party, and now they have circled the wagons and are starting to protect one another,” he said.

Rep. Fred Upton of Michigan tweeted that he was “appalled by the President’s tweets. There’s no excuse. Inflammatory rhetoric from both sides of the aisle that is used to divide us just isn’t right. It’s not helpful. We have too many challenges facing us…”

Pat Toomey of Pennsylvania was the first Republican senator to speak out about the tweets, saying, “…I couldn’t disagree more with these congresswomen’s views on immigration, socialism, national security, and virtually every policy issue. But they are entitled to their opinions, however misguided they may be. We should defeat their ideas on the merits, not on the basis of their ancestry.”

Other Republicans made sure to criticize the congressional quartet as they chided the president.

Rep. Elise Stefanik, R-N.Y., tweeted that “While I strongly disagree with the tactics, policies, and rhetoric of the far-left socialist ‘Squad,’ the President’s tweets were inappropriate, denigrating, and wrong. It is unacceptable to to tell legal U.S. citizens to go back to their home country.”

Sen. Mitt Romney of Utah — a former Republican presidential nominee who’d vowed to speak out in January about “significant statements or actions that are divisive, racist, sexist, anti-immigrant, dishonest or destructive to democratic institutions” — was far more measured.

Asked by NBC10 in Boston to respond to Trump saying the congresswomen should go back to the countries where they’re from, Romney said:

“I certainly feel that a number of these new members of Congress have views that are not consistent with my experience and not consistent with building a strong America. At the same time, I recognize that the president has a unique and noble calling to unite all Americans, regardless of our creeds or our race or the place of our national origin. And I think in that case, the president fell far short with his comments yesterday.”

Asked if he thought the comments were racist, he said, “That’s all I got.”

Republican leadership was silent on the controversy.

Treasury Secretary Steve Mnuchin offered a quick defense of the president at the White House before trying to move on.

“I don’t find them racist, the president just went on and clarified his comments,” Mnuchin said after Trump’s White House remarks. “I think he speaks for himself on that and he was very clear but again we’re focused on cryptocurrencies.”

Freedom Caucus chair Mark Meadows said, “I don’t get involved in a critiquing tweets from the Democrats or the Republicans,” but “I can say that the frustration that the President expressed is more out of having a crisis at the border.”