Home Gay Life In the end, sadly, Twitter’s ‘Gay Footballer’ may have been just a... 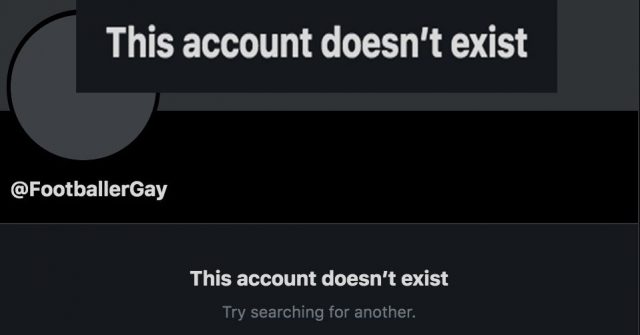 Tuesday morning I was messaging with a colleague speculating how “Gay Footballer” on Twitter was going to get out of his self-declared coming-out date of Wednesday. The Twitter account @FootballerGay had garnered about 50,000 followers since he posted his initial message on July 5 that said he was a professional soccer player in the English Football League and would be coming out publicly.

The Twitter account and its claims raised the hopes of many who believed that we would finally see another Championship or Premier League player on the pitch during matches. We haven’t seen one in over two decades.

Yet my colleague and I thought from the first days we heard about the Twitter account that it could be a phony. In the coming days and weeks it had all the markings. He publicly announced his intention to announce he’s gay … instead of just announcing the news itself. He claimed to be early-20s but wrote like mid-50s. He was telling the world he had a secret, yet he was telling everyone where to look. He was tweeting at young sports reporters offering to bring them to him to do an interview.

By Tuesday — despite saying 48 hours earlier he would be having a big press conference on Wednesday to announce who he is — no one we knew in the British press had received an invitation to the alleged press conference. No one had gotten any inclination of who this person was.

We’ve seen plenty of hoaxes and false stories before about gay athletes coming out in English soccer:

We at Outsports will never forget the lessons learned from “Mikey the hockey player.”

In the end, after raising the hopes of thousands of people if not more, Gay Footballer did what we figured had to be the next step: He bailed, saying simply “I thought I was stronger. I was wrong.”

From his very first post less than three weeks ago, people had flocked to his Twitter feed to share support. Many had also said what was on the minds of many — This was a hoax from the start.

So he followed up his tweet on Tuesday with what would be the last time we heard from him: 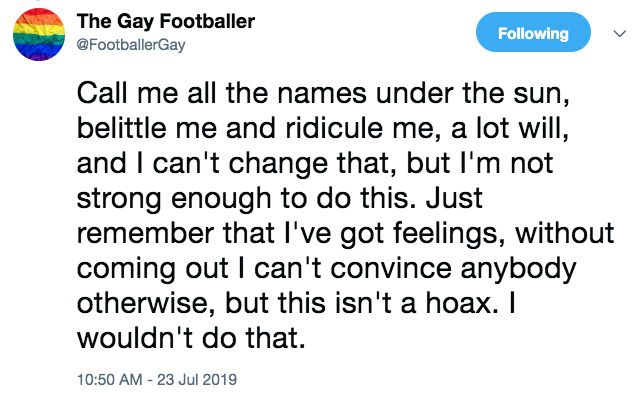 To be clear, I’m not calling him names. I’m not ridiculing this person. Still, we have to now deal with the fact that this was, in all likelihood, never true.

There is, of course, a slight chance that Gay Footballer really is a gay pro soccer player not yet in his prime who was thinking about coming out on July 24. Unlikely, but possible. It’s more possible it’s a gay athlete testing the waters. But most likely, sadly, it’s neither of those.

Regardless of the likely hoax this person pulled off on Twitter over the last three weeks, the important fact is that there are gay footballers out there playing across England, Europe and beyond. If there is a positive to come out of the last few weeks it’s the support people across the Twitterverse, in sports and in the media showed a hypothetical gay pro athlete.

As we at Outsports have said for years, male professional soccer players in England, and pro athletes across North America, will be widely accepted when they do come out, just as they all have been for the last decade. After 20 years of telling the coming-out stories of LGBTQ people in sports, if done well the next gay English pro soccer player to come out publicly will be embraced, as I laid out last year.

Aaron Flanagan, himself an LGBTQ person in sports who struggled coming out, put it perfectly in his column for The Mirror, “We just have to hope that this whole debacle has not put people off being open about themselves.”