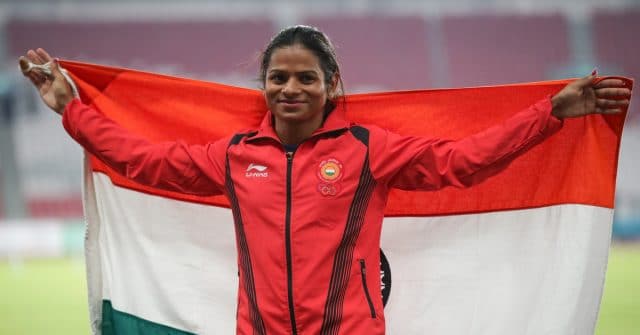 Dutee Chand, India’s first openly gay sportsperson, has revealed that she’s been surprised by the support she’s received since coming out – and that she has only just learned who Ellen DeGeneres is.

Chand came out nine days ago on May 21, telling the Indian Express that she was in a same-sex relationship with her “soulmate.”

Chand’s decision to go public was partly driven by her older sister’s threat to out her.

“Almost 90 percent of the people who wrote to me on Facebook have been supportive,” Chand said to the News India Times. “This has given me courage that I did the right thing.”

“She’s the 100m record holder and the first openly gay sportsperson in India. I guess she knows a thing or two about being first. I’m so proud of her,” DeGeneres tweeted.

Chand later thanked DeGeneres via Twitter for her standing with her.

The outpouring of support came from closer to home, too.

“It is not easy to come out in certain societies. This is huge for India!” tweeted Payoshni Mitra, a researcher on gender issues in sports.

Chand was cleared to race in 2015 in a landmark ruling that questioned the credibility of setting limits on female athletes’ hormone levels.

She is supportive of Caster Semenya, who was banned earlier this month from competing due to her own naturally high testosterone levels. Chand said, “It was my legal team that handled her case. The team that fought my case, I handed them over to Caster Semenya.”

“She is an Olympic medallist and her country is behind her,” Chand said.

Chand is the only openly gay athlete in India, where gay sex was decriminalised in 2018.