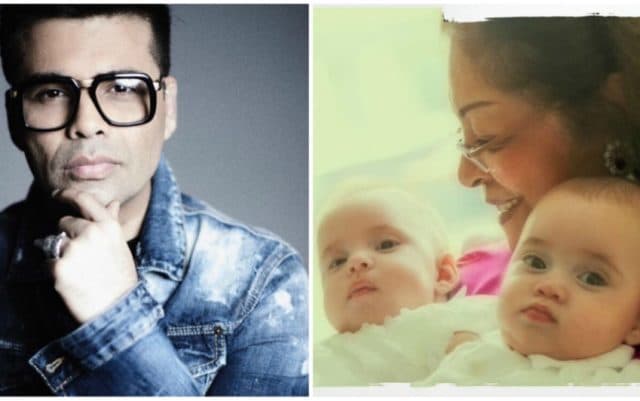 The five-month-old twins are called Yash and Roohi

One of Bollywood’s most powerful men and India’s most famous gay man has become a father to twins.

Karan Johar is a director, producer and talk show host who has made a string of Bollywood hits. As one of the most recognized faces in India he is extremely influential

Johar’s twins were born in February via a surrogate mother, but he only shared a photo of them recently on Twitter.

The photo is of Johar’s mother holding the twins, Yash and Roohi. He captioned the photo, ‘Loves of my life!!!! My mom and my babies.’

The filmmaker released the photo to mark Rakshan Bandhan, an annual Hindu celebration of kinship between siblings.

Johar has revealed he will dedicated his next movie to his five-month-old twins.

‘My cinema has always been an extension of my state of mind,’ he told the Indian Express.

‘It’s not that I will make parental film but there would be layers in my next film that would actually explicitly portray my humongous level of excitement for having Yash and Roohi.’

A strange coming out

Despite constantly dropping hints about his sexuality, especially on his TV talk show, Koffee with Karan, the star has never explicitly said he was gay.

Many hoped he would come out in 2017 autobiography ‘An Unsuitable Boy’, but he refused to saying he was already a ‘poster boy for homosexuality’.

‘Everybody knows what my sexual orientation is. I don’t need to scream it out. I won’t only because I live in a country where I could possibly be jailed for saying this,’ he wrote in his autobiography.

‘The reason I don’t say it out aloud is simply that I don’t want to be dealing with the [police complaints].

‘I’m not going to sit in the courts because of ridiculous, completely bigoted individuals who have no education, no intelligence, who go into some kind of rapture for publicity.’