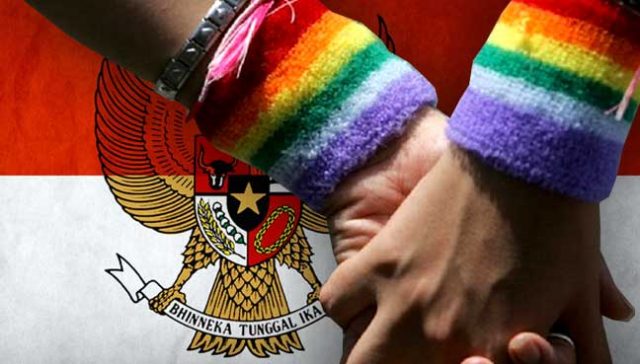 Homosexuality is not illegal in Indonesia, but police plan to charge the men with breaking anti-pornography laws.

An Indonesian gay couple has been arrested after a photo on Facebook of the men kissing sparked anger, police said Friday, in the latest move against the country’s homosexual community.

There has been a growing backlash against gay people in the world’s most populous Muslim-majority country this year, with government ministers and religious leaders lining up to denounce them.

The 22-year-old university student and 24-year-old office worker were arrested Tuesday in the city of Manado, on central Sulawesi island, after social media users complained about the picture of them kissing in bed, police said.

“The couple admitted it’s them in the picture and they posted the picture to prove their love,” local police spokesman Marzuki, who like many Indonesians goes by one name, told AFP.

Homosexuality is not illegal in Indonesia, but police plan to charge the men with breaking anti-pornography laws and under tough legislation governing internet content.

The couple, who are not in police custody and whose identities were not disclosed, could be jailed if found guilty.

After the picture was posted on October 9, it went viral and sparked a flood of angry responses.

The image was removed from Facebook after a request from the communications and information technology ministry, local media reported.

The case follows criticism of the government after the youth and sports ministry this week barred members of the lesbian, gay, bisexual and transgender (LGBT) community from applying for a job.

The online advertisement for the post of creative youth ambassador said candidates should “not be involved in casual sex or deviant acts, including LGBT”, and that this should be proven with a doctor’s certificate.

The ad was revised, with the part about LGBT dropped, after an outcry.

Prior to the recent wave of intolerance, members of the gay community had been able to quietly get on with their lives.

Activists believe the backlash was triggered by widespread coverage of the legalisation of same-sex marriage in the United States last year.