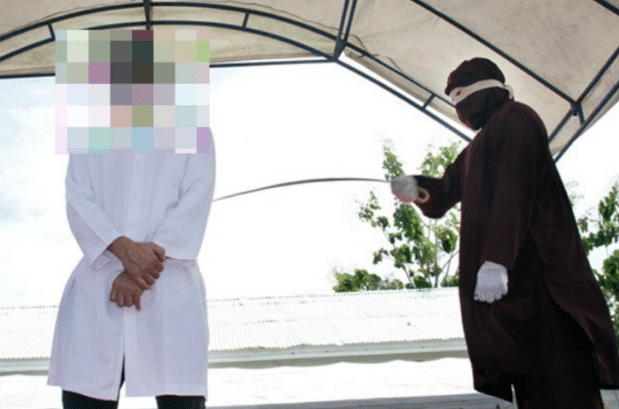 In April, Aceh passed a law to no longer do this in public

According to a report by ABS-CBN News, the men were part of a group of 15 who were flogged in front of a vocal crowd.

Authorities punished them for having gay sex. Islamic law in the province outlaws such acts. Aceh is the only Indonesian province to enforce such Islamic law.

ABS-CBN’s reporter Agence France-Presse noted the crowd grew to about 1,000 people. They were vocal during the floggings, shouting things like: ‘Flog them harder.’

Other people faced flogging for crimes such as drinking and selling alcohol, and showing affection in public.

In the face of international outcry and condemnation, Aceh decided to make future floggings and canings a private affair. Today’s demonstration, however, proves they are not sticking to that policy.

Most parts of Indonesia do not criminalize private, consenual homosexual acts. Though the country at large has no laws protecting LGBTI people from discrimination or hate crimes.

Same-sex couples in the country also do not receive protections or benefits.