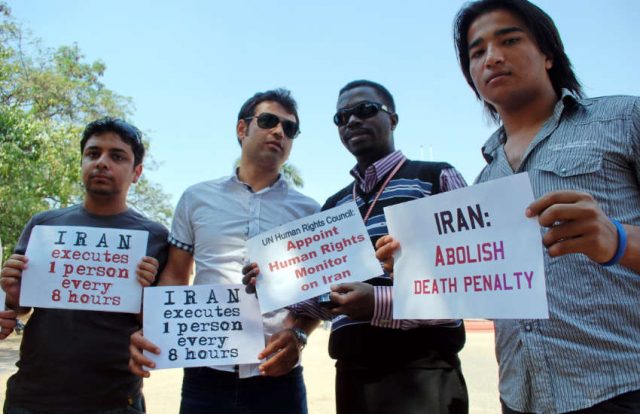 According to Articles 108 to 113, consensual same-sex sexual activity is punishable by death, for both partners. A person must confess four times to sodomy or have four ‘righteous’ men testify that sodomy occurred.

On Monday (10 June), German political reporter Paul Ronzheimer asked: ‘Why are homosexuals executed in Iran because of their sexual orientation?’

The question initially caused an audible response from Iranian colleagues in the room.

Zarif then responded: ‘Our society has moral principles. And we live according to these principles.

‘These are moral principles concerning the behavior of people in general. And that means that the law is respected and the law is obeyed,’ he said.

In an interview with the , Ronzheimer revealed he did not disclose his own sexuality during the news conference.

He said posing the question was an unnerving experience for him. Ronzheimer also revealed his Berlin-based American boyfriend helped phrase the question in English beforehand.

‘I think I had a bit of a shaky voice toward the end,’ he said.

‘I spoke to [The Washington Post] about what it’s like, as a gay man in Tehran,’ he said. ‘To ask the foreign secretary why gay people are being executed in his country.’

Richard Grenell is the US ambassador to Germany and the country’s most senior openly-gay official. He slammed Iran today (12 June) for its position on LGBTI rights.

According to , he said: ‘The Iranian regime has violated basic principles of the United Nations.

‘UN members should honor [the UN Universal Declaration of Human Rights] if they want to be members at all. The criminalization of homosexuality plainly violates this declaration,’ he said.

‘I don’t see why we shouldn’t ask to see a world free of criminalization by 2030,’ Victor Madrigal told the International Gay and Lesbian and Transgender Association (ILGA) world conference in New Zealand.

Some 70 states worldwide criminalize same-sex consensual activity, according to an ILGA report.