Home Gay Stars Is homophobic Poland about to get its first openly gay president? 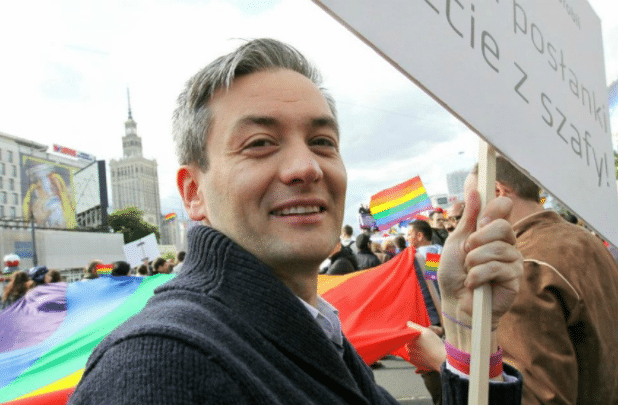 Robert Biedroń is throwing his hat in the presidential campaign ahead of a national vote in 2020.

Even though the election is a few years away, recent polls show one in every four Poles is willing to vote for Biedroń. This is a remarkable achievement in a country where between 50 and 70% of people do not approve of same-sex relationships.

Announcing his candidacy now allows him plenty of time to campaign and build his support even further.

The very vocal LGBTI activist made history in 2014 when he became the first gay mayor in Poland when won local elections in the northern area of Slupsk. In that election he won 57% of votes in the second round of voting.

Biedroń’s popularity is anomaly in Poland, a country where 90% of the country is Roman Catholic, not only is he openly gay, he’s also an atheist.

The 42-year-old is will represent the center-left party Your Movement in the elections.

‘But, first of all, I will always be myself’

Biedroń is a vocal supporter of LGBTI rights and is board member of the Polish Campaign Against Homophobia. But he still faced a lot of discrimination and violence because of his sexuality early in his political career.

Biedroń is in a long term relationship with lawyer Krzysztof Śmiszek. The pair have been an item for 16 years. He often shares photographs of them on his social media accounts.

Biedroń says his ambitions for Poland are simple, that he wants equal opportunities for all.

‘I am just a boy from Krosno, who is often swimming against the tide, a leader who can lead a dialogue and unite people,’Biedroń says on his website.

‘The son, brother, colleague, and finally Krzysztof’s partner, a man who respects nature, who cares about animal welfare.

‘(I’m) A politician who loves Poland, who is focused on the sustainable development of a modern honest state that provides equal opportunities for all, supporting education and culture, ensuring security and development.

‘But, first of all, I will always be myself, Robert Biedroń.’