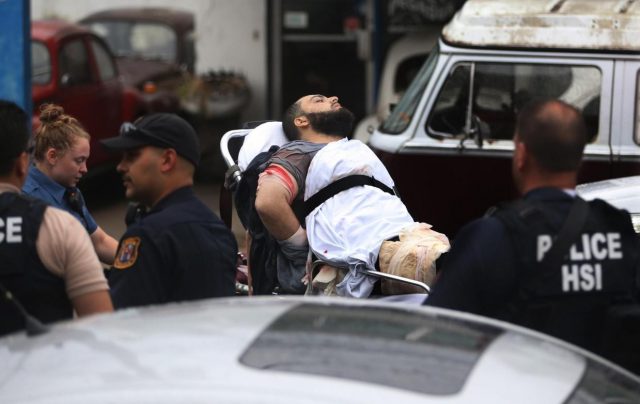 Authorities arrested Ahmad Khan Rahami on Monday in connection with the bombing that took place in Chelsea district in New York City.

29 people were injured in the blast.

Rahami was arrested after a shootout with police this morning. Rahami shot a police officer in the abdomen during his arrest.
The officer was wearing a bullet-proof vest that saved him. Ramai worked at his family’s chicken restaurant called “First American Chicken.”
His friends and family says he was radicalized in Afghanistan.
He traveled there three times!

Ahmad Rahami also hated gays.
He targeted the Chelsea district in New York City which has a large number of LGBT Americans.

Chelsea District is a predominantly gay district in New York City. Chelsea has a large LGBT population, and is known for its social diversity and inclusion.

The man who police nabbed and shot Monday after a day-long dragnet in connection with a series of terror attacks in and around New York was a bad father who disliked America, hated gays and took long trips to his homeland of Afghanistan, according to the mother of his young daughter.

Maria, whose full name is being withheld by FoxNews.com, said her high school sweetheart, Ahmad Khan Rahami, didn’t pay child support and often railed against American culture. The 26-year-old, who spoke after her grandmother called her for a reporter who produced his press credential and identified himself at the grandmother’s home in Elizabeth, said she had not seen Rahami in two years.

“He would speak often of Western culture and how it was different back home,” she said. “How there weren’t homosexuals in Afghanistan.

“He seemed standoffish to American culture, but I never thought he would cross the line,” she added.