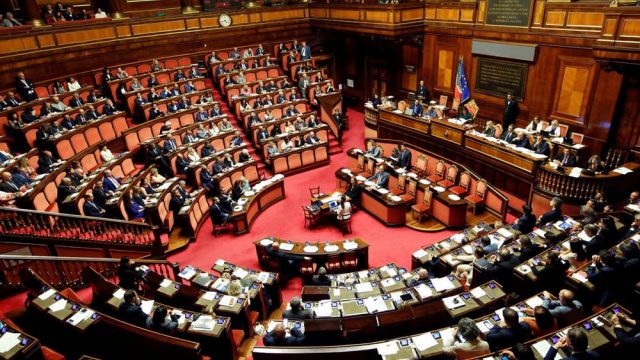 An Italian MP faces losing her seat in parliament for being elected under her birth name, and after claiming the rights to her true identity.

The case involves Piera Aiello, the first anti-mafia witness elected to the Chamber of Deputies in Italy’s history.

For 27 years, Aiello lived in a secret location under an assumed name as part of a witness protection programme hiding her from the Mafia.

But the 52-year-old, whose testimonies against the notorious crime syndicate led to dozens of arrests, cast aside her secret life when she was elected to parliament in March last year with the anti-establishment Five Star Movement.

Born in the Sicilian town of Partanna, Aiello says she was later forced to marry Nicola Atria, the son of local Mafia boss Vito Atria, when she was only 18 years old.

Both father and son were killed within a few years, having become victims of the feud between old and new mafiosos in the province of Trapani — it was a bloody war in which Matteo Messina Denaro, the most wanted Mafia boss who is still on the run, also took part.

Aiello’s father-in-law Vito was murdered around a vineyard in Partanna just days after she married his son, while her husband Nicola was killed in front of her in the home they shared several years later.

In 1991, when she was widowed, Aiello decided to collaborate with judicial authorities together with Nicola’s sister, Rita Atria.

But this move, to inform against the group that her late husband was a huge part of, was a feared one — and she was forced to go into hiding and discard her former identity.

While in hiding, Aiello and her sister-in-law formed a close friendship with judge Paolo Borsellino, who was murdered by the Mafia a year later.

Feeling desperate after the death of her confidante, Rita Atria took her own life by jumping off a balcony in Rome a week later.

Almost three decades after those events, and after a half-life spent in secret, Piera Aiello decided in January 2018 to return to using her birth name in order to run for elections with the Five Star Movement.

But here comes the issue.

In order to take part to the elections, Aiello was required to present electoral and residence certificates released by the Municipality of Partanna.

During the election campaign — and on the ballot paper — she used her birth name that, theoretically, no longer exists, and can no longer be certified in any municipality.

It is not clear how the electoral certificate was printed by the Registry Office of her municipality if her name was no longer certifiable.

We have contacted the municipality of Partanna for comment on this, but are yet to receive a response.

The candidate who lost to Piera Aiello in the 2018 election honed in on this discrepancy, and eventually appealed against her win.

An investigation has now been in the court of Sciacca, competent for Partanna.

Later in the year, members of Italy’s parliament election committee may have to face a decision upon the fate of their colleague — will she be forced to give up her seat to her rival, guilty of having used her own identity?

The prosecutor in charge of the investigation has asked for the case to be closed, but after a staunch opposition from the complainant, the judge has taken more time to look into the case.

Speaking to Euronews, Aiello said: “The complainant claims that the identity given to me by my father is dead.”

“I have respect and trust in the judiciary. At this moment, I have in my hand a decree saying that I have returned to being Piera Aiello, signed by the ministers of Justice and Grace and the Interior.”

“If I had died, how could I have been resurrected?”

Aiello also denies that her name no longer exists at the registry office of Partanna.

“The name is there — those who say otherwise are wrong. So much so that when I wrote a book 2012, called “Maledetta Mafia”, I had to open a bank account under my name,” she said.

The congresswoman says in past years she has kept both names “without any difficulty”, even at times when she needed to collect an inheritance.

Speaking of her hometown Partanna, where she occasionally returns, she said: “There are people who are proud of me, and people who still would like to kill. Things do not change.”

A few days earlier Aiello laid flowers on the tomb of her late sister-in-law, Rita.

Today in the Chamber of Deputies, sits Piera Aiello sits with the the Justice Commission, and is a member of the Commission of Inquiry into the Mafia, as well as acting Chairman of the Committee of Witnesses and Collaborators of Justice at the Parliamentary Commission Antimafia.

Soon, she will put forward a bill that for a support fund to allow the children of those in the witness protection program to be supported in their studies, and to have a future.