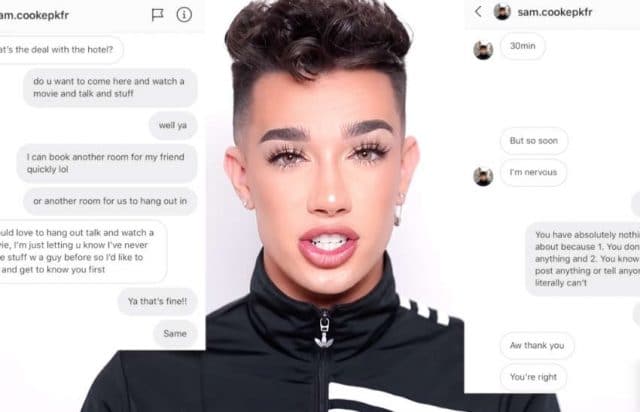 YouTube star James Charles has addressed his high-profile feud with fellow YouTuber Tati Westbrook for what he says will be the last time.

In a video titled No More Lies, Charles unpacks some of the accusations which have been leveled at him.

He also described the emotional trauma from the feud with Westbrook as ‘the most painful time’ of his life.

The recent falling out between Westbrook and Charles has been big news in the world of social media influencers.

The duo became popular figures on YouTube for their makeup tutorial videos. They had started out as close friends, though the two fell out over an advertising disagreement earlier this month.

Due to the YouTubers’ extensive fan bases and online financial interests, the feud has been widely covered in the mainstream media.

Charles, who will be 20 next week, posted the 41-minute-long video on Saturday (18 May). After going makeup-free in recent outings, Charles’ latest video sees him returning to the heavily made-up look synonymous with his brand image.

In the video, he opens up about how the feud with Westbrook has affected him, and addresses some of the accusations which have been leveled at him.

‘It is very important to me that this video has all the information, all the facts, all the receipts and is current and present because I will not be addressing it again,’ he said. This included shows instances of times he had promoted Westbrook’s beauty products, contrary to what she had claimed.

Charles also responded to Westbrook accusing him of attempting to ‘manipulate someone’s sexuality’, referencing encounter he had with a waiter. Charles said that while they had met in a hotel room and kissed, all acts were entirely consensual.

‘I have never and would never and will never use my fame, money, or power to manipulate or get any sexual actions from a guy. That is disgusting,’ Charles said. ‘I am a 19-year-old virgin […] I really don’t get a lot of action.’

In a particularly heartfelt moment, Charles spoke about the mental and emotional toll the feud had taken on him.

‘The last few weeks of my life have literally been the most painful time I’ve ever had to deal with,’ Charles said. ‘And my head and brain, for a hot minute, went to a place so dark that I didn’t think I was going to come back from.

‘I can’t believe I just admitted that on camera,’ he added.

The falling out between the two YouTube stars stems from a dispute over branding sponsorship.

In previous years, Westbrook had described Charles as a protege. The two regularly collaborated on makeup tutorial videos.

At one point Westbrook had reportedly asked Charles to help her promote her beauty products, Halo Beauty, on his channel. Charles reportedly declined to promote Westbrook’s brand, though went on to appear in an ad for a rival supplement company, Sugar Bear Hair Care.

Westbrook said that by shunning her beauty produces in favor of a rival left her feeling ‘betrayed’ and ‘lost’.

Earlier this month, Westbrook posted a 43-minute video on YouTube called Bye Sister, in which she claimed she was officially severing ties with Charles. At the time of writing, the video has almost 50 million views.

This is not the first time Charles’ behavior has been met with backlash.

In April, Charles posted an apology for implying that trans men weren’t men. ‘You are valid in your identity!!’ he said. ‘I apologize & should’ve chosen my words wiser!’

Also in April, fans expressed outrage over ticket prices for Charles’ tour. The prices ran from $52.20, up to $500 for the ‘VIP package’.

With an increase in social media followers and mostly positive publicity, Westbrook has largely benefitted from the high-profile falling out.

However, some have accused Westbrook of turning a blind eye to Charles other instances of offensive behavior in the past, and note that she only spoke out against Charles’ behavior when it concerned her financial interests.