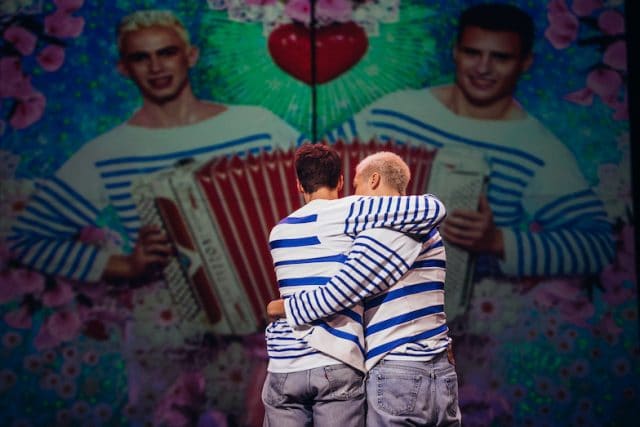 The Fashion Freak Show is quite unlike anything we’ve seen in a long time. More a cabaret revue than a straightforward theatrical experience, it’s a sort-of biographical show, offering a handful of snapshots into key moments of Gaultier’s life and career, alongside some comedy sketches, photoshoots, catwalks and party scenes. The dramatic element is paper thin, and it’s wildly indulgent and self-congratulatory, but the multi-talented troupe of performers ensure that it’s also tremendous fun.

Essentially it’s two hours of dancing, singing and voguing to a superb soundtrack curated by Chic’s Nile Rodgers. Each scene is visually striking in its own way, with a wide variety of fabulous fabrics on display, and numerous looks referencing his most famous collections. There’s some clever use of projection in places to augment the scenes, although some of the visual elements – with cameos tailored much more towards the show’s original French audience – may not have the same impact here.

There’s still a lot to enjoy. It’s a hugely aesthetically-pleasing performance, with some eye-catching outfits – and plenty of flesh – on display. We’re used to seeing shows where the costumes are as good as they can be on a limited budget, but here, unsurprisingly, the quality is so much higher. While the looks may no longer be as outrageous or exciting as they were in the ‘80s and ‘90s, they’re still impressive in their own right. The music is an excellent fit, too – a wonderfully retro collection of camp club classics including Relax, Vogue and Smalltown Boy.

We had a really fun night out with Jean Paul Gaultier’s Fashion Freak Show. It’s not the most thought-provoking of shows and there’s very little substance, but it all looks and sounds wonderful, and it has an amusing and subversive sense of humour. A few visual elements may be lost on a British audience, but the jokes poked at Karl Lagerfeld’s expense, or the references to the Eurotrash show Gaultier co-hosted, will play well to the London crowd. Those looking for a healthy dose of high camp fun will find that this certainly ticks all the right boxes.

More information can be found here.