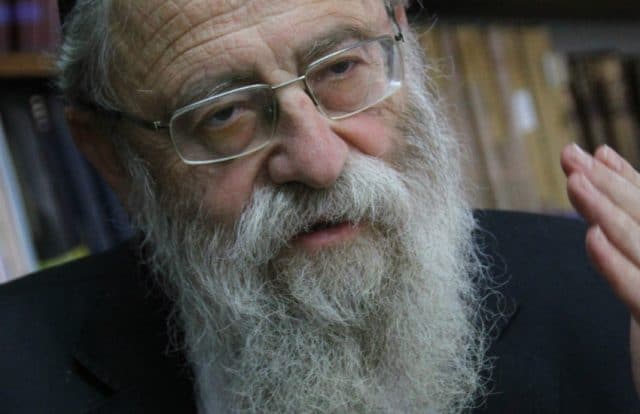 The lead rabbi in Jerusalem is urging the city’s mayor to disallow rainbow flags from flying during Pride as they ‘mar’ the city.

Rabbi Aryeh Stern sent a formal letter to Mayor Moshe Lion, which was .

‘Unfortunately, I have to address the painful topic of the “parade” about to be held next week,’ he started the letter.

‘I know that by law the mayor doesn’t have the authority to prevent the parade and therefore I ask you to at least give an order not to hang the flags, which mar the city.’

Stern concluded the letter by stating he trusts Lion ‘to act wisely and spare us this embarrassment’.

The Jerusalem Municipality, however, said rainbow flags would be allowed to fly as planned.

‘There is no place in public service for a person with such unenlightened and offensive views,’ he said. ‘It is infuriating to hear that two weeks before pride events kick off… the Jerusalem chief rabbi comes out with despicable and dangerous remarks that are inciting against the [LGBT] community.’

Many consider Lion a political ally to Orthodox council members, though he’s not as conservative as other politicians regarding LGBTI rights.

As Deputy Mayor last year, Lion did not attend Pride but also either. Other mayoral candidates, however, made statements about canceling Pride if elected.

‘Dear residents of Jerusalem, at the end of this day I would like to explain. As I have said several times, I am the mayor of all residents and residency of the city and Jerusalem is all of us,’ he wrote in a tweet.

‘The municipality in my first works according to the principle of maintaining the status quo and respecting every person. The open-house budgeting will be approved at the Council on the next Thursday, each year.’