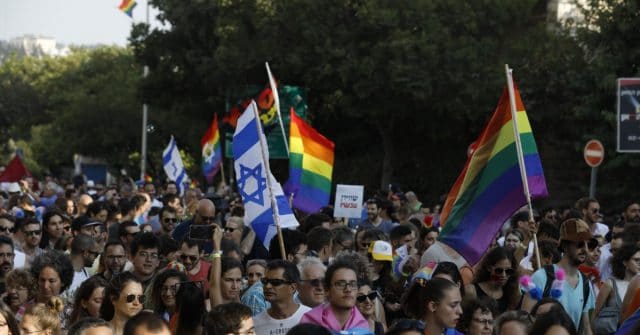 Jerusalem Pride organisers have spoken out against a police security plan that would require marchers to show ID.

Activists from Jerusalem Open Home spoke out ahead of the June 6 Pride march, after police proposed a security plan that would require all protesters to show their IDs in order to gain entry to the parade.

Police want to set up security checkpoints around the parade route, with marchers required to show identity documents to pass.

However, in a post to social media, parade organisers raised fears that “the demand for identity cards on the parade raises serious concerns about privacy.”

Organisers explained: “No one will intimidate us and no one will stop us from marching.

“The march in the capital will continue to be safe and secure, as felt by the tens of thousands of marchers who have marched with us in recent years.

“We are working with the police to clarify things, but we will say clearly now: No one will be stopped from entering without ID cards – we will not allow this to happen.”

Supporters raised fears that the requirement to show ID cards could discourage transgender people, Palestinian citizens and others who may be concerned about their identities being recorded.

In a statement to the Times of Israel, Israeli Police said: “We are preparing in a orderly and professional manner for the parade, and in an effort to ensure the parade’s existence, we are preparing for security checks at the entrance, including a requirement to present an ID as stipulated by law.”

The event has long been a source of tension between LGBT residents and ultra-Orthodox elements of the city’s religious communities, with high levels of security in place for the event following a knife attack in 2015.

Schlissel, who had just been released from prison over a previous attack on the very same parade,was jailed for life plus 31 years for the killing.

2017’s Pride event saw a string of arrests amid a feared attack.