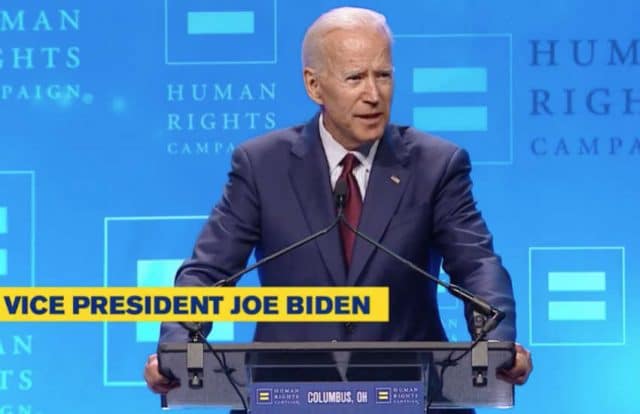 Democratic presidential candidate Joe Biden has said that ensuring LGBTI rights and protections under the Equality Act would be his first legislative priority as president.

The former vice president also labeled the administration of President Donald Trump as ‘wrong and immoral’ with regards to LGBTI rights.

Hundreds of LGBTI rights activists were in attendance at the gala. The event coincided with the first day of the annual Pride Month.

A number of US political figures have also taken the opportunity to express their commitment to LGBTI rights.

In his speech lasting just over 30 minutes, Biden discussed praised the progress the LGBTI rights movement has made over recent decades.

‘There’s nothing that can change what you’ve started,’ Biden said. ‘Many of you paid a personal price for being who you are. You risked your jobs. You risked your livelihoods. Many risked their physical wellbeing.

‘Thanks to you our children and grandchildren are growing up in a world which is far more just, far more open-minded.’

However, he added that there was still much work to be to ensure the protections of LGBTI people in the US. ‘This fight, as you know, is not nearly over,’ Biden added.

Calling LGBTIrightss the ‘civil rights issue of our time’, the presidential hopeful went on to lambast the Trump administration for their poor record with regards to LGBTI equality.

‘It’s wrong and it is immoral what they’re doing,’ Biden said about the Trump administration. ‘They’re on the wrong side of history,’ he added.

‘Just like with racial justice and women’s rights, we are seeing pushback against all the progress we’ve made toward equality,’ he added.

Biden concluded by saying he remains optimistic for the future of LGBTI rights. He also noted how far the country’s LGBTI rights movement had come in the 50 years since the Stonewall Riots.

A number of other Democratic presidential hopefuls have also celebrated the start of Pride Month and reaffirmed their support for LGBTI rights.

President Trump also . This is the first time his administration had recognized the date.

However, the president’s tweet was met with anger from a number of LGBTI rights advocates. Many felt the acknowledgment glossed over the Trump administration’s poor record on LGBTI rights.

LGBTI rights group GLAAD described the acknowledgment as ‘gaslighting’. GLAAD has tallied over in the US.

Charlotte Clymer of the Human Rights Campaign was equally as scathing. ‘From day one of this administration, Donald Trump and Mike Pence have systematically worked to limit the legal rights and livelihoods of LGBTQ people,’ Clymer said.