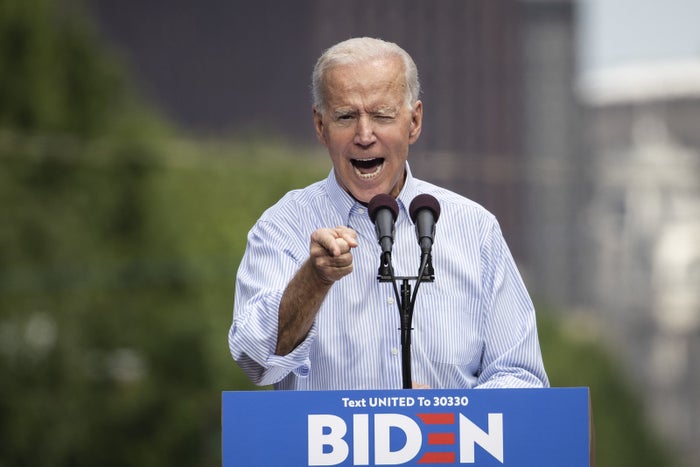 Joe Biden’s presidential kickoff speech in Philadelphia on Saturday was less an official entrance into the primary campaign he’s already been waging for almost a month than a jump to a general election fight against Donald Trump, with frequent, explicit condemnations of the president.

And even though there’ve been fears going back to 2016 that focusing on Trump is the best way to lose to Trump, that’s exactly what his supporters in Philadelphia said they want him to be doing.

“I think it needs to be said,” Kristina Bell, 48, said, after listening to Biden talk about Trump repeatedly during the event. “Parents shouldn’t have to explain to their kids that their president is a liar… that’s not what this country’s about.”

“I think it’s wonderful. Someone has to hold Trump accountable,” said Tracey Inman, 54.

Voters at Biden’s campaign rally said they thought the candidate overtly targeting Trump is “necessary” and “honest,” as Biden positions himself as already going up against the president himself, as he leads in primary polls.

Biden’s speech was centered around a “unity” theme, set against Trump, who he called the “divider in chief.”

At the rally — his first after announcing his campaign will base its headquarters in Philadelphia — Biden again talked about the battle for “the soul of the nation” and referred to the Trump administration as a “threat to this nation, to our democracy.”

“We’ve watched the president now for three years. Look at what he’s doing. Instilling fear, I mean not joking, instilling fear, sowing division, stroking racial division,” Biden said. “Undercutting every institution that was designed to check the abuse of power.”

It was an escalation of the back-and-forth between Biden and Trump, and one of the most aggressive efforts from any 2020 Democrat so far to directly talk about the president’s divisive and racist rhetoric. Biden’s not alone among the Democratic field in making denunciations of Trump central to his campaign — New York City Mayor Bill de Blasio launched his own campaign this week with repeated digs at “Con Don” — but his front-runner’s campaign is leaning into his strategy of focusing on Trump as a morally unfit leader and portraying himself as a uniting figure for the country, rather than detailing specific proposals for what he’d do in office to set him apart from other Democrats.

That focus has gotten on Trump’s radar, too — he’s repeatedly tweeted about Biden in recent weeks, and even recorded a video response to de Blasio. Biden’s supporters are happy for the attention.

“I love that, and the fact that Trump is responding shows that Biden is getting under his skin,” said Angie Johnson, 50 years old.

“I think it’s a good thing,” said Jenna Williams, 24, but she added that she would like to see Biden give more detail on what policy he’d pursue as president.

Some at the rally said part of why they weren’t put off by Biden attacking Trump is because they think the standards of political discourse have changed.

“He threw some serious shade, and if it were like eight years ago I would be a little upset, I would think that was unprofessional. But the face of politics has changed so much … for him to throw that much shade that’s almost subtle and clever, that’s a good thing,” said Amber Earls, 30, after Biden’s speech.

Earls added that she hopes Biden doesn’t take it too far.

“Now if he starts throwing shade like, ‘This is why I’m better than Trump, I did this in my campaign and he didn’t,’ that would get kind of sour. But I don’t think he will,” she said.

Others at the rally drew a distinction between the kinds of attacks the president has been tweeting about Biden and how Biden has been phrasing his criticisms of Trump.

“I wouldn’t say he’s necessarily attacking Trump,” said Kasi White, 21. “I would say he’s doing it in a very professional way rather than tweeting nasty things about him like Trump would.”

One Biden supporter, John Schock, 68, said he thought Biden could stand to talk a little less about Trump.

“I don’t think he really has to. Everyone knows that. I think he could tone it down a little,” he said.

While Biden spoke Saturday in broad strokes about health care, education, and other issues, his underlying message was clear: “Beat Trump,” he said, is the first and most important plank of his climate proposal. Biden hasn’t given other specifics about that plan yet, outside broadly calling for a “clean energy revolution,” and comments from one of his advisors to Reuters have led progressives to be concerned that his eventual plan will not go far enough.

Several people at the rally said they’re supporting Biden or seriously considering it because “we just need to win, and I think Biden can win”, as Lorri Kohli. 55, put it, echoing Democrats in early-voting primary states who’ve said they see Biden as the most “electable” Democrat.

Biden’s decision to anchor his campaign in Pennsylvania, which turned red for the first time in nearly 20 years and voted for Trump in the 2016 election, is another sign that his campaign is focusing on speaking to the general election rather than just the primary from the get-go.

On Saturday, he made only a few brief comments that appeared to reference the fact that he’s in a primary with nearly two dozen Democratic competitors. “Folks I’m going to say something outrageous, I know how to make government work. Not just because I’ve talked or tweeted about it but because I’ve done it,” he said at one point.

Other candidates, though, have begun taking Biden on in interviews on the campaign trail Elizabeth Warren said Biden “was on the side of the credit card companies” because he voted for a law in 2005, which critics say was weighted against families facing bankruptcy. Bernie Sanders questioned Biden’s progressive credentials, raising Biden’s vote in favor of the Iraq war and the North American Free Trade Agreement, which is widely criticized by progressives.