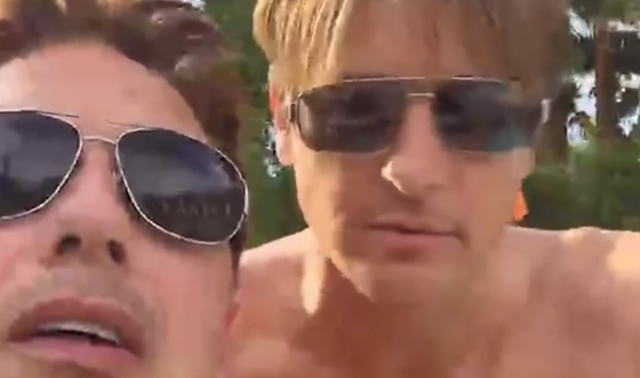 While receiving the Human Rights Campaign’s Visibility Award last week, actor John Barrowman made it a point to thank his husband’s genitals.

Barrowman, best known for his work on Arrow, recounted how husband Scott Gill unwittingly exposed his manhood to the world.

Barrowman was blithely filming a Facebook live post from his Palm Springs hot tub back in April when his husband Gill spilled into frame on his way to an impromptu skinny dip.

“When I walked in I was very proud and thought, ‘Okay, I’m going to get this honor today and I’m chuffed by it,” he told the 800 audience members packed into Barry Manilow’s estate on November 5.

“Every man that came up to me said, ‘Thank you for posting that video of your husband on Facebook.’ Now you know why I’m always smiling.”

“It’s on YouTube if you haven’t seen it. Even my mother and father watched it. That was awkward!”

In fact, the actor’s parents also attended the event, as did Gill, who made the executive decision to wear clothing that evening.

Barrowman and Gil have been married since July 2013, and had a civil partnership ceremony back in December 2006.