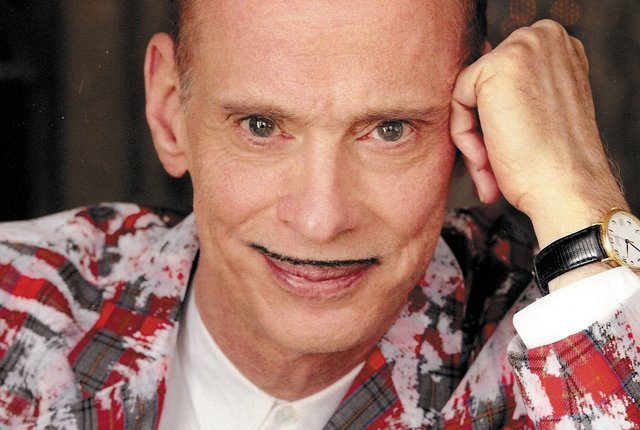 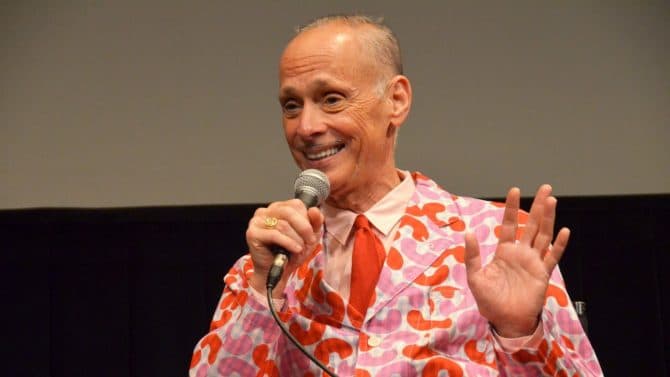 “You’re about the furthest you can come. Maybe the top of Maine might be further.”

John Waters chides us for our long-distance journey from Los Angeles to Provincetown, Massachusets, located on the tip of Cape Cod. We meet one another on a sunny afternoon in the garden of a local mansion, celebrity-studded party in full swing, courtesy of the Provincetown Film Festival.

Waters, of course, transcended his rebellious beginnings as the guerilla filmmaker of scandalous movies like Pink Flamingoes, Female Trouble and Polyester to become a mainstream success with films like Hairspray and Cry-Baby–as well as a reliable queer wit on the political stage. In Provincetown, the citizens treat him like royalty, particularly for his support of the Provincetown Film Festival over the years.

This year, he also released a self-help book, Mr. Know-It-All: Wisdom of a Filth Elder at the local bookstore over Festival weekend.

Waters’ blue eyes peek out over the rims of his dark sunglasses, his pencil mustache curling upward in a grin as I sit down across from him. Queerty managed to score a few minutes with the Pope of Trash just after his book signing.

Must have been a good teacher.

I’ve been coming here for 55 years. And I’ve been at all 21 festivals.

I came here when I was 16, 17. Somebody was like It’s a weird place, you’ll like it. So I hitchhiked here. It was. And I did. I worked for Molly Malone and Mary Oliver, who became a giant poet. Then I ran the Provincetown bookshop for many years as a young man. Turned the windows into this place. My first movie premiered at the church up on Shank Painter Road. I hate hot weather. I can’t do Baltimore; it’s too hot. So I just come here. I write here. I have a chapter in my book about it: it’s called “No Vacation.” I’m not really on vacation. I work every day like I’m at home. But, you know, I can pretend I’m in Spain and go to the beach.

They don’t have that thing anymore that they used to take off three hours in the middle of the day.

They had it, but it’s like everywhere. Everyone works in the city but they don’t live there, so the workers can’t get home to go to sleep.

Yeah. Strangers & Saints. When I was young here, the hippest, coolest restaurant was called Front Street. Now it’s still here, and I’m not saying it isn’t [cool anymore], but it’s not the hip scene that it was. It was all coked up. So Strangers & Saints is like Front Street without the cocaine.

That’s the old Front Street. It’s not like that now, and I’m not insulting the one that’s there. It’s still a good restaurant. But it used to be a real scene there. And everyone used cocaine. 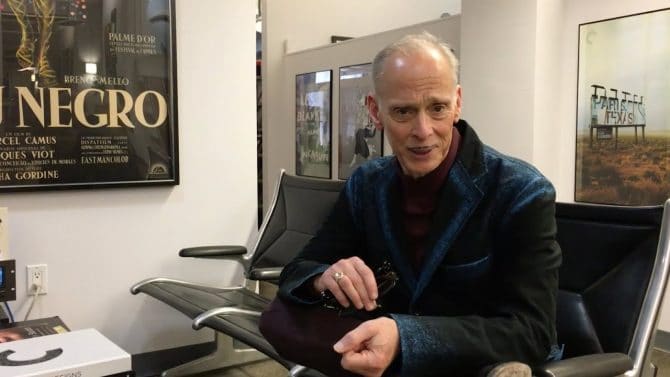 I know. So I would say Strangers & Saints is the cool, hipster place. I like very much Jimmy’s Hideaway. It reminds me of Boys in the Band. I like The Muse. But I’m on the road so much I don’t get to go there much.

But at the festival, I go see lots of movies. I ride my bike everywhere. I have the same old beat up bike I’ve had forever.

I always think someone is going to steal it. When I was young I always stole a bike.

That was the first thing you did. The first night you got here…

The statute of limitations is up. The first night you got here, you’d steal a bike and go paint it. Everyone did that!

Yeah. I got away with it every time. I did it every year for 10 years at least.

I haven’t been this year, but I like The Underground. I like straight bars because that’s where the minority goes. I used to go to the Bradford Basement, which was a townie bar. But this year I haven’t scoped them out to see, because it changes every year. If I’m going to go to a bar…Colony, I used to go to. I haven’t been out long enough this year.

The A-house used to always be disco. I hated disco. And now everybody dances looking at their phones. I hate that.

I know. I have a soft spot for the A-house. I always walk by. That’s where Tennessee Williams met his boyfriend. I saw Judy Garland there sitting in there drunk. Ella Fitzgerald, Billie Holiday played there. So the little bar in the A-house is really where I bow my head as I walk by.

That’s where I saw Judy Garland dead drunk. She wouldn’t mind that I’m telling you this…

The leather bar, did you go to that one?

That to me…men look silly at the beach in leather.

Leather pants if you’re over 21—not easy to pull off. But I like going in there. Once a summer I always go in there just because there’s a lot of action in there. So I’m for that. I can be for things I don’t go to. But it’s extreme in there. So if I had to pick a gay bar that’s the one I’d go to. Then this other bar, The Monkey Bar…but I can’t go in there. I have bonding on my teeth. What are those lights called? 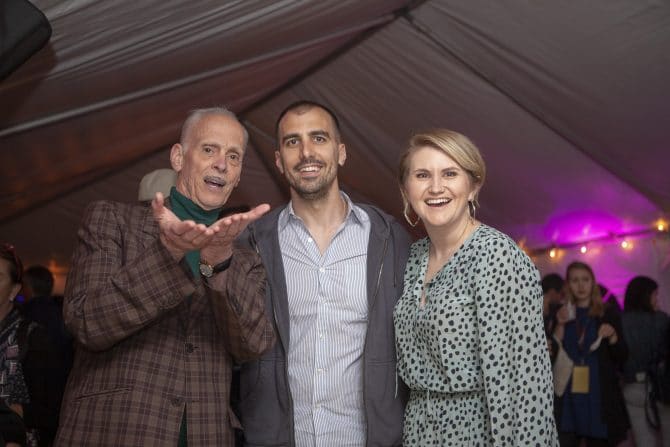 You know, Edith Sitwell’s mother veiled her for school because she didn’t want other children to hassle her. That’s really mean.

I really liked Rocketman. I really enjoyed the Queen one too.

I voted for it for the Oscar.

Oh yeah. And the guy that came in to finish that did Rocketman.

Oh yes, they’ve been optioned. A couple times. I really hope they do it after I’m dead because I’ll just hate it.

Like in the Elton movie, he didn’t sing that song at the Troubadour.

And I know they’ll do that. I don’t want to hear it from all my friends who are alive: Why did you?! Although I’ve said it in other interviews, Steve Buscemi should play me at this age, and Matthew Gray Gubler could play me young. Though he’s much better looking than I was.

Yeah, I like him. But I don’t know if it will happen or not.

But it’s a long story. Spanning where to where? I don’t know. I hope it ends…I don’t know. 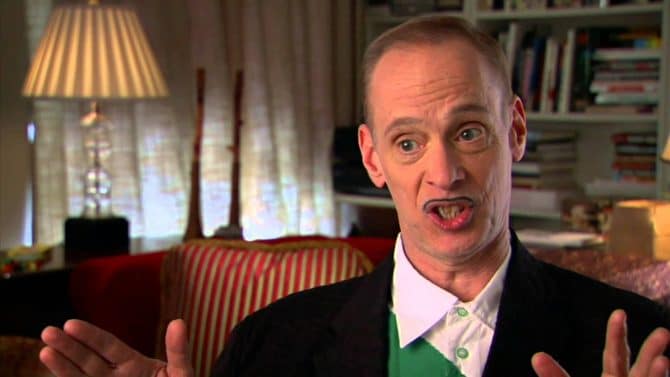 Well, I don’t want to write it, direct it, or maybe even see it.

Bishop Fulton Sheen. He wrote one.

Look him up. The ridiculous ones from the 50s, it’s sort of a parody on that, just to have a way to tell all my stories. I think my advice is good. I’ve been doing what I want. I never had to get a real job. I didn’t really change. I’m still doing the same thing. I think that’s negotiation, planning, and organization. So I try to explain how to do that: how to fail upwards.

A young gay filmmaker should just be a filmmaker, not a gay filmmaker. In other words, don’t be a separatist. Everyone should hang…gay, straight. I think gay people should be able to go in [like coming out] too. People should be able to change and sometimes when they do, they get grief. There are real bisexual people. They are real. So I’m just thinking for a young filmmaker, don’t limit yourself. I don’t want my book in the gay section with true crime back by the bathroom, next to humor. That’s the only thing worse than the gay section: the humor section.

Or next to a Peanuts cartoon book. Which I like! And it’s ok to be in the gay section, but in a way, I’m against separatism because everybody should be inside. Get right in there if you’re a good filmmaker. And straight people can make gay movies. It doesn’t matter. Look at the guy who did Rocketman. He’s straight as far as I know.

Or how about when gay actors play straight people? Nobody ever says “Oh, how brave!” 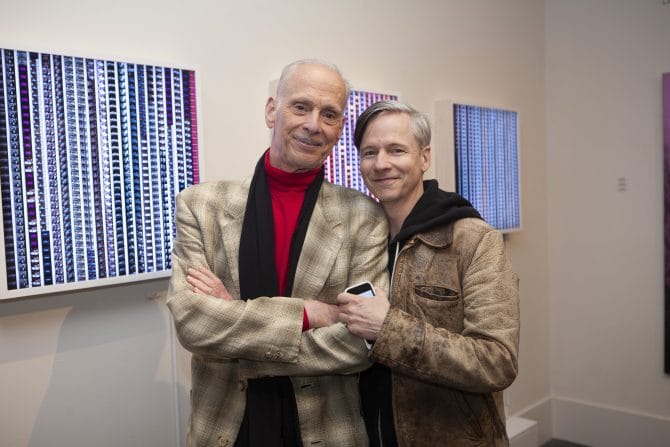 With John Cameron Mitchell at the Provincetown Film Festival

But then if you’re a gay person playing a straight person they say, “You’re a closet queen.” Look at Kevin Spacey.

And what happened to him wasn’t about his roles.

She liked me. She reviewed Hairspray, gave Divine a great review. He died a week later. So he was really thrilled about that. I loved her. She was a huge influence on me. And they show her smoking and drinking.

That kind of a power of a critic will never happen again.

I liked him the least.

God, I love arguing with you!