Home Gay Life Johnson or Hunt? What to expect from the UK’s Conservative leadership contest 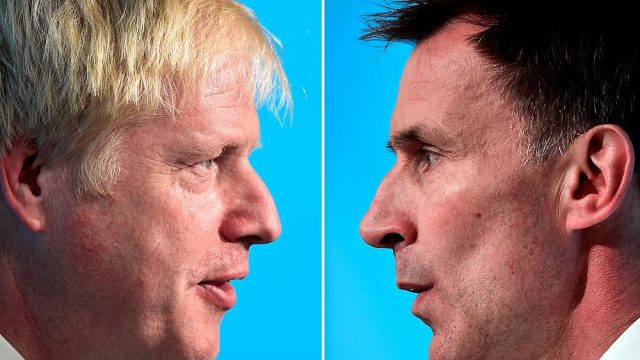 The British Conservative party is set to announce a new prime minister that will replace Theresa May as leader of the party and the country on Tuesday.

London’s former mayor Boris Johnson is the favourite to win the contest against rival UK foreign secretary Jeremy Hunt. Johnson is so far ahead with bookmakers and pollsters that if he doesn’t win it will be a huge shock.

Johnson campaigned to revive the country’s “mojo” and promised Britain would leave the EU on October 31 “come what may”.

The new prime minister will take office on Wednesday in a neatly choreographed handover where May goes to Buckingham Palace and asks Queen Elizabeth II to invite her Conservative successor to form a government. The new leader will then speak to the nation in front of his new residence at 10 Downing Street that afternoon.

Challenges from the get-go

But the new prime minister could face a challenge even before he starts leading. The opposition Labour Party is considering calling a no-confidence vote in the Conservative government on Thursday. It would take only a handful of Conservative rebels to defeat the government and unless it can overturn that vote within 14 days it could trigger an early election.

One thing that might stop this from happening is that Parliament starts its six-week summer break on Friday and Labour might wait until the autumn to make the move.

Both Johnson and Hunt have said they would start talks with the EU to change the withdrawal agreement agreed by May but rejected by the British Parliament three times. However, the EU has insisted they will not renegotiate.

The two contestants have said that the key to winning Parliament backing for a Brexit deal is to leave the “backstop” deal aside but the EU insists that without a backstop there can be no deal for Brexit.

The new Conservative leader will also have to start preparations for a no-deal Brexit scenario. Johnson has previously said that if the UK prepares correctly, a no-deal Brexit will be “vanishingly inexpensive”. But the government’s Office for Budget Responsibility said that crashing out of the bloc would shrink the British economy by 2% within a year, drive down the pound currency and plunge the UK into a recession.

In order to avoid such a scenario from happening, MPs passed last week a measure to prevent the new prime minister from suspending Parliament in the fall — an idea Johnson suggested he could do if legislators try to stop Brexit.

But despite this, the UK will stop being a member of the EU on October 31, with our without a deal, unless the government revokes the decision to leave or the EU extends the delay.