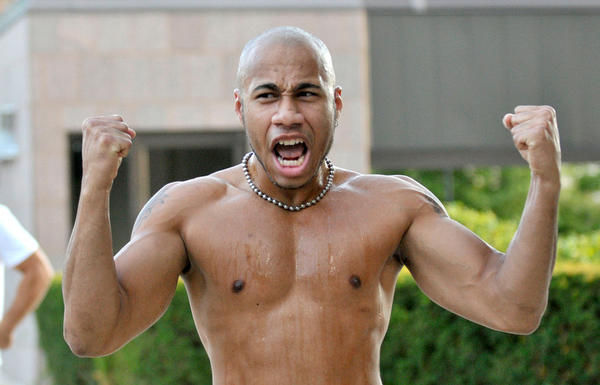 Heather Coit/The News-GazetteMatt Cage gets the audience revved up as he prepares to take on Christian Rose, whom he later defeats, at the Zero 1 USA Fighting Athletes event during the first day of the Urbana Sweetcorn Festival on Friday, August 24, 2012. The festival continues today from 11a.m. to 11p.m.

Well, this could either be super entertaining or completely horrifying: WWE says that they’re going to incorporate LGBT themes into their upcoming storylines.

An encouraging detail is that they’re working with GLAAD to ensure that depictions are appropriate. But heaven knows what “appropriate” even means in the context of professional wrestling, where everything is an extreme and over the top. It’ll be very very hard for writers to depict queer characters without it turning into a bunch of stereotypes.

“We’ve had GLAAD come in and speak to our entire writing team and give a whole tutorial on sensitivities, the right words, the wrong word and why those words matter,” said WWE Chief Brand Manager Stephanie McMahon. “I think that with their guidance and support, we will be able to portray that LGBT storyline appropriately.”

Well okay! If you say so! It’s certainly a promising sign that they’re trying to be inclusive, and bringing in speakers from GLAAD is definitely the right move. And it certainly has the potential to be sexy.

But WWE has certainly messed up portrayals of queer characters in the past: they had two villains named Billy & Chuck who wrestled as a couple before being unmasked as fakers. And there was a gay-panic character named Mickie James.

So it would be nice to see queer stories done right: maybe one of the bad-guy wrestlers starts picking on a gay character, and the good guys team up to defend him. Or some macho wrestler keeps hitting on a female character, and then together she and her girlfriend defeat him in the ring. You know, something a little more complex than “ew, gays are mincing” or “ick they’re all sexual predators.”