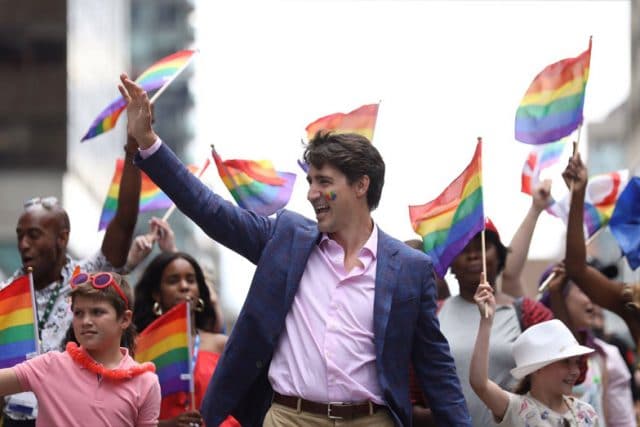 Next week, Canada’s government will issue a formal apology to citizens who were persecuted just for being gay.

For decades, thousands of Canadians working across the civil service were fired purely because of their sexual orientation.

The persecution took place from the 1950s right up to 1992, with LGBTQ military personnel being forced out of their jobs for fears they were susceptible to foreign intimidation and blackmail because of their sexuality or identity.

The government had also developed a “fruit machine” test to determine who was gay, measuring the arousal to pornographic images to provide grounds for dismissal based on sexual orientation.

Trudeau first promised this apology a year ago, and has spent the time since consulting with aides for the best way to approach it.

On November 28, the Government will offer a formal apology to LGBTQ2 Canadians in the House – for the persecution & injustices they have suffered, and to advance together on the path to equality & inclusion.

“On November 28, the Government will offer a formal apology to LGBTQ2 Canadians in the House – for the persecution & injustices they have suffered, and to advance together on the path to equality & inclusion,” Trudeau announced on Twitter.

However, the government is still facing a class action suit from more than 2,000 people who claim they were unfairly dismissed by the federal government based on their sexual orientation.

Negotiations for settlements are currently underway.

Justin Trudeau has been, and continues to be, a massive champion for the LGBTQ community.

He became the first sitting PM in Canada to ever walk in the Halifax Pride parade, but it wasn’t the first time that he’s made such history, as he was also the first Canadian leader to march the Toronto Pride last year.

“I’m very much looking forward to getting that over with so there won’t be any more firsts,” he told reporters at the time, “and that it just be expected that prime ministers, when their schedules allow, march in Pride parades across the country.”