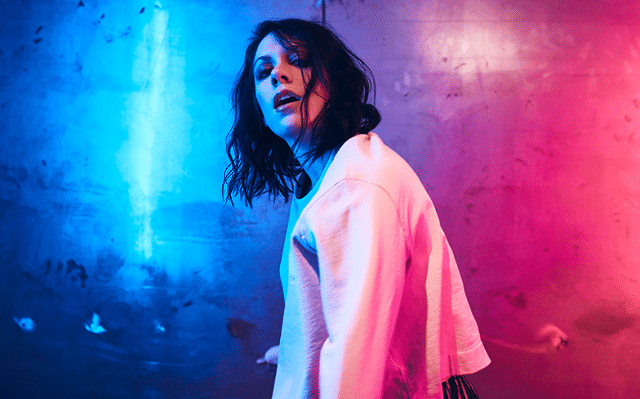 “A change certainly has to happen, and it’s begun to happen in the US in terms of a lot of younger people, people of colour, women running for office,” she passionately continues in regards to representation. “It feels like there’s this incredible disconnect between people who have political power and the people who are governed by that political power.”

Since her debut in the industry, K.Flay has used her platform to speak out on political issues and to advocate for equality, as evidenced on songs such as The President Has a Sex Tape, in which she hits out at the unequal distribution of power and resources. Last week, she released her long-awaited third studio album, Solutions, and while it lacks some of the anger from her previous two efforts, it still boasts K.Flay’s political electro-rock bite.

In celebration of her new album, we caught up with the Grammy-nominated musician and discussed the importance of diverse representation, how her first queer romance with fellow artist Miya Follock influenced the album’s themes, and why she was hesitant to publicly live her truth as a member of the LGBTQ community.

Why did you call the album Solutions?
The title came to me mid-way through the process. There were a couple of things about that word that really resonated with me and my headspace for the record. In the broadest sense, it felt like on Every Where Is Somewhere, that was an exploration of problems, and different kinds of problems; romantic problems, existential problems, problems of identity and the overwhelming largeness of the world. I think this time around, I toured after three years, was in a state of mental and physical exhaustion, and by the end I wasn’t taking the best care of myself. I think I was just at a point, personally and creatively in my life, where I was looking to explore the other side of problems. For every songwriter, the starting point is a place of pain or negativity or doubt or something quite dark. The challenge for me on this album and what was really exciting and inspirational, was how do I take that moment of pain or angst and shift my perception of evolution? Or hope? I thought, ‘Maybe this life as we know it doesn’t have to be pure pain.’ Of course, there’s going to be a sense of loss, always, but people leave. I really tried to decontextualise that stuff and it’s very in line with what I’m doing in my personal life, at home in LA, which is taking care of myself, going to therapy, falling in love… This period in my life feels like I’m earnestly looking for some solutions. 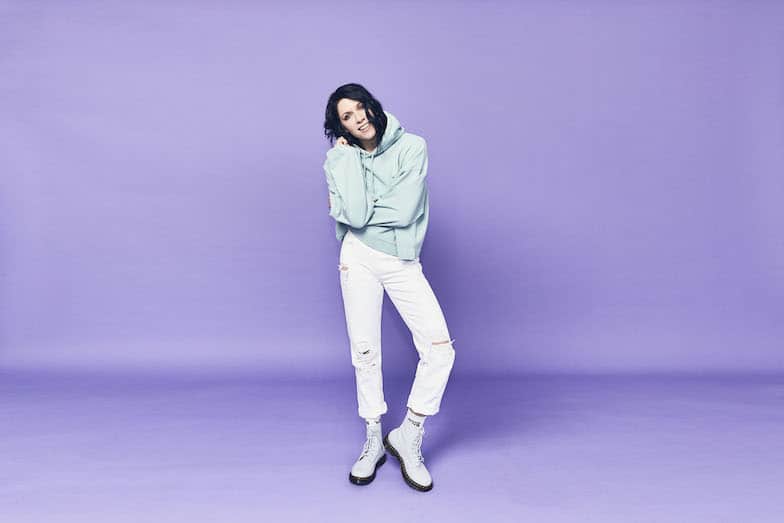 The album still has the classic K.Flay bite to it, but this time it feels like even more of a critique on modern day society – as evidenced in songs such as I Like Myself – was this a conscious decision?
Yeah, I personally feel that one of the statements you can do, particularly as a musician or a creative person, is to be like, ‘Fuck the world, I’m going to wear all black, everything sucks, I’m depressed.’ There is this revelling in negativity or cynicism that is celebrated, in a lot of ways, and it doesn’t feel all that authentic to me. I was talking to a friend of mine recently about producing and writing songs and the advice that they had been given, and they said, ‘If you’re not scared to play it for people, the thing you wrote, it’s probably not that good.’ There should be a sense of radical honesty or vulnerability, and I think for me, the thing that felt the scariest to admit was the track you referred to, which is why I wanted it to be the first track on the album because it tonally sets the scene. It’s, ‘Hey, you know what? I actually do like myself most of the time.’ I think I’m doing an okay job, instead of swimming endlessly in a pool of doubt and negativity, I’m coming up for air [laughs]. I do think it’s a very tenuous alchemy, I’d say, in terms of cynicism. You need cynicism as a society in order to fight fascism and all these other things. We need people who are asking those kinds of questions, but there’s a point where that cynicism will easily tip into a safe net, that isn’t productive and feels like this spiral that never moves anywhere. My take on that is that it’s not very good for us, to be in that spiral. As I look around at the world and my peers, I see that happening, so I wanted to be a voice suggesting maybe a slightly, cautiously more optimistic way to look at things.

Your video for Bad Vibes showcased a diverse range of powerful women – was this important for you to do, especially in this Tr*mp dominated era?
It’s super important. Representation, as a very broad concept, is incredibly important and as I’ve been doing interviews and talking about the record, what keeps coming up and what I certainly think a lot about, to me the barometer of privilege is nuanced. The most privileged people are afforded the most cultural nuance, like a straight, white, upper-middle class man can be depicted as a drug addict or a manager or the president or a single dad, there’s space for that. As you look at different demographics and categories, that spectrum of nuance is constricted as you go. That’s why representation is important, because it contributes to nuance. I certainly have a ton of work to do in that department, but I think everything counts. Everybody who is making public art is part of that conversation and part of the creation of nuance.

You mention you “need some good news” on the album – what good news are you hoping for?
I see in my everyday life as a resident of Los Angeles and as a touring musician, getting to travel all over the world and being in all of these different places – which is one of the best parts of the job – a level of tolerance and progression in so many ways, where people are having conversations about nuance and representation. Not in an overly PC way, but in an honest way that’s like, ‘Hey, what’s going on in our society? What are these things we’re taking for granted?’ Now we’re taking a step back and thinking critically about that. To see this happening in my everyday life and then I look at the people that represent us, our government officials – and this extends beyond the United States obviously and I’m sure you can relate – it feels like there’s this incredible disconnect between people who have political power and the people who are governed by that political power. In a really broad sense, because it spans so many broad issues for me and different political agendas, the good news would be for those political figures, their agendas to align with the agendas of everyday people that I know, who are trying to live life, to live life openly. A change certainly has to happen, and it’s begun to happen in the US in terms of a lot of younger people, people of colour, women running for office. We have to have real threats to our democracy and freedom in order to motivate change. I’m excited to see governments that feel similar to the world in which I live.

Like you mentioned earlier, Solutions is a bit more positive – has your relationship with Miya Follock influenced the album?
We started dating pretty much when I began to write this record, and for anyone who’s fallen in love, you sort of have to be optimistic. You can’t fall in love if you’re bitterly cynical. I don’t think it usually works! So there was a lot of openness, excitement and optimism, y’know? I don’t think I need optimism, but a temporary optimism, which I think is the best kind there is. Our relationship has provided a lot of the environment and background for these songs to be created and furthermore, when you start seeing someone, you want to impress them with what you do, whatever it is. So I was really excited to work on songs for my own career and manager and label and team, but also this other person, who I wanted to share what I do with, and I wanted to do it well. The other side of it too is being in a relationship with a woman, which is the first time I’ve ever done that, that put me out of my comfort zone. Any time that any of us are out of our comfort zone, we grow and we improve. We’re confronted with fears and insecurities we didn’t know we had, just because we’re forced to deal with them. Being outside of my comfort zone really helped me be braver with my music in general. The most brave thing I can do is say, ‘You know what? I don’t hate myself all the time and I’m going to smile.’ People who know me outside of music know me as a pretty upbeat person, pretty effervescent, I’ve got a lot of energy, and I don’t always represent that side of myself in the music. I’ve always represented it on my social media and everything else. Taking that step to showcase that within my creative work was really influenced by our relationship. 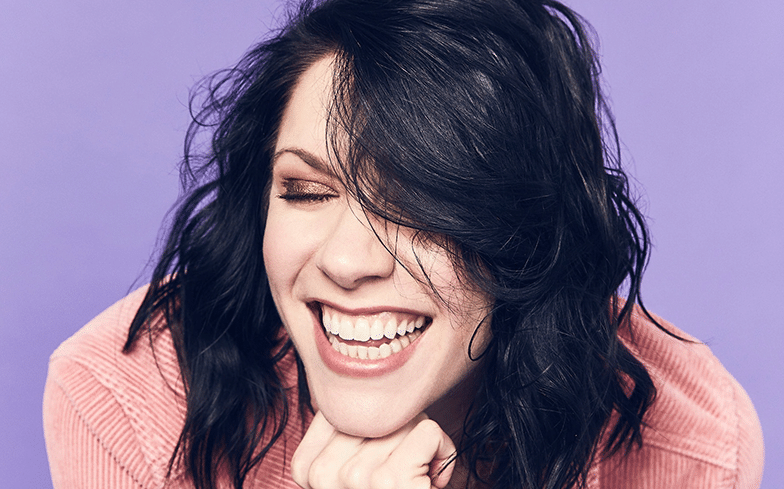 You said that Miya was your first same-sex relationship – how is that experience been for you?
It’s been great. I’ve spent so much of my life in queer spaces. I have always had a lot of friends who identify as gay, bi, lesbian, queer, whatever, throughout the ages. So I’ve always felt pretty connected to that community, and I spent some very informative years in San Francisco after I graduated from college, where I lived with three roommates, all of whom were queer. I felt always really comfortable and welcome in those queer spaces and in that community, now my kind of role there is a little different. The point of life is to keep expanding your mind, and not to sound cheesy, your heart and your experiences.

In an interview with GQ, you said you were nervous about going public with the relationship because you didn’t want it to seem like a ploy to sell records – has this been an issue so far?
It has not been an issue, and I think it hasn’t been an issue because she and I were both very conscious of that. You asked the question, ‘How has this relationship influenced the album?’ Well it has, so it is part of the conversation and to omit it would be disingenuous in some way. However, the idea of capitalising on this identity and this community that’s kind of new to me in certain ways is something I don’t want to do. I understand the implications of that and I understand the long history of identities being used by people for nefarious, self-serving purposes. I considered it at great length and had many many conversations with many of my friends and my manager and people that I work with, and speaking honestly, it felt for everyone that our story was useful to tell. More than anything, that felt like the driving force to tell it. The response has been incredible. I had so many songs about all the bad people I’ve dated, so I think people are just very happy that I’m happy!