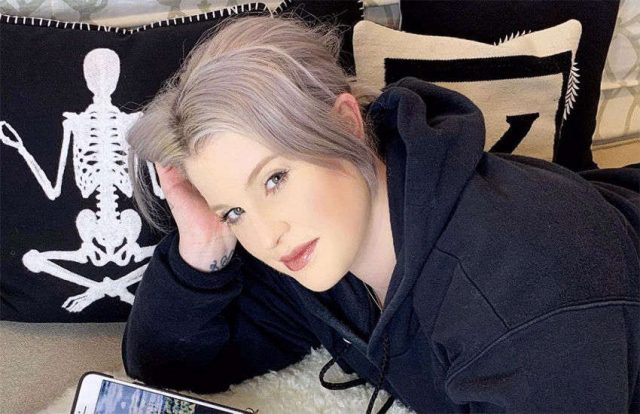 Kelly Osbourne has condemned the outing of closeted LGBTI people, as she prepares to host tonight’s British LGBT Awards in London.

The daughter of iconic music manager Sharon Osbourne and her husband Ozzy Osbourne, lead singer of Black Sabbath, added that closeted stars have confided in her about their sexuality. ‘I take it very seriously,’ she said.

‘A week ago someone I work with very closely came to me and asked about a very famous person, and if they are gay. I refused to comment or talk about it. It could end my working relationship with them if they push the issue.’

‘I am not in the business of outing anyone,’ she furthermore continued. ‘I think people who do are terrible.’

Speaking about the hosting gig, Kelly said:  ‘As a straight woman, it’s a really big honour. To even be considered means that I’m accepted by a community I truly love. But it also makes me nervous!’

Asked what straight allyship means to her, Kelly replied: ‘It’s lending my voice to a community that has helped create who I am, and helped me become who I am.’

‘Whenever I’ve felt ugly and unworthy, it was the gay community that embraced those things,’ she added. ‘The things society was told me were ugly and not pretty.’

Kelly furthermore adds that she has ‘lots’ of trans friends and that trans advocacy is the LGBTI issue closest to her heart in 2019.

‘It is so important right now. It’s so hard for people of a certain generation to understand what it must be like for someone trapped in the wrong body.’

‘To see people refuse to dress members of the trans community, or refuse to call them him, her or they… It bothers me in America how they can’t serve in the armed forces. It just doesn’t make sense to me, it’s such a step backwards.’

After becoming a globally-recognized face on The Osbournes as a young teen, she went on to work on shows such as Fashion Police, Project Runway and RuPaul’s Drag Race.

Kelly – who is bringing her boyfriend Jimmy Q as her plus one to the awards – spoke at length about her love of the reality show during our interview. ‘I learnt how to stand in a way that showed off my curves, more feminine, from when I went on RuPaul’s Drag Race for the first time,’ she said.

‘I was doing a picture and Todrick Hall was like “no, honey, no!” He showed me how to stand properly, which is something I never forgot.’

One of her best friends is London DJ and drag queen Jodie Harsh. ‘The way that Michelle and Ru are is the way me and Jodie are!’ she joked. ‘I remember the first time she did drag – we grew up together, have been on many journeys together.

‘I first met her when we started DJ-ing together at Circus. I have a poster of us that went up all over Soho in 2007! She’s one of my lifelong besties.’

While Jodie is not able to attend tonight’s awards, Kelly will have stars such as DJ Fat Tony and Munroe Bergdorf sitting at her table – although she confirmed her parents won’t be attending.

‘They aren’t here – they’re in America! My mom would definitely come, and it wouldn’t be hard to get my dad to come, put it that way!’ she laughed.

Finally, the star names pop icon Elton John as one of the LGBTI people who was most influential to her as a child.

‘He’s played a huge role in my life and my family’s life. He and David Furnish are so incredible with the work they do with the Elton John AIDS Foundation. They’ve always been a shoulder to cry on, there to give whatever advice you may need. I can’t wait for the Rocketman premiere on Monday!’

For more information about the awards, visit the official website.