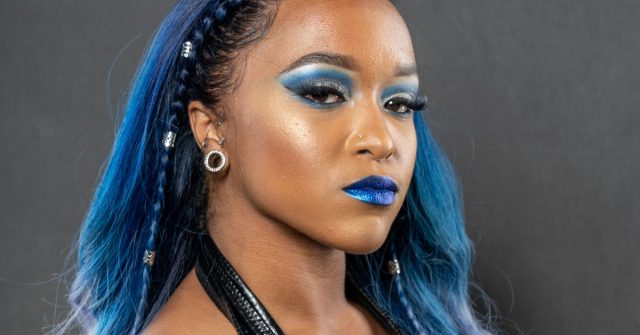 Impact Wrestling is going to be hot under the collar for some time to come as the company announced the signing of current Knockout Kiera Hogan to a multi-year contract on Thursday.

Hogan’s new deal comes one week after going public with her relationship with former Impact co-worker Diamante. Hogan sat down with Outsports to discuss her new contract, coming out as LGBTQ and the events surrounding her and Diamante’s adorable announcement.

How does it feel to feel to sign a new multi-year contract with Impact Wrestling?

It’s honestly great, I’m so glad to continue to be a part of the roster and to continue to be a part of the Impact family, because, honestly, that’s what it is. I honestly wouldn’t want to be anywhere else. It’s the best locker room I’ve been in. Both men and women, we all look out for each other. We all are very close with each other. I just feel like we’re such a close knit family that all want to do something really great with this platform that we’ve been given. I’m just so happy to be able to stay around and grow with the company. It’s just so crazy to think about me talking about the Knockouts division when I was 16 years old, and saying how they had the best women’s wrestlers. To be a part of the division, I can actually vouch for that now. I knew in my heart that Impact was going to be my home.

You came out as LGBTQ in an Instagram post during Pride month this year. Why do you believe that was the right time to do so?

Pride month started and I felt different about this year. I recently just got out of a five-year relationship, and I had this mindset of not hiding who I am and not being afraid of who I am and just being me. Don’t let anybody’s judgment steer you from being who you are. I kind of got in an unapologetic mindset after that. I felt like I couldn’t be myself fully in that relationship. Being out of that and being able to grow as a person in the few months after the breakup, I just got into the mindset of just completely being me. Why should I be afraid of being who I am?

As a kid, I was bullied. I was given death threats. There was a whole situation that actually I talk about more in the new season of WOW. The struggles that I had in middle school growing up, going through that and then hiding it for so long and not being able to accept it because nobody really talked to me about it. So I just hid it. But now, being an adult and seeing the progression of the LGBT community, it’s all so inspiring. I became so confident in being who I am to a point where I was just like, you know what, I feel like I can share this with the world. I don’t want to hide this anymore. I feel like I can be accepted for who I am now.

Your post didn’t explicitly state that you were coming out, not that it had to, obviously. Did that cause any confusion for people who responded to you?

After I made my first post, yes, people were kind of confused. I got a lot of questions because I didn’t actually specify. The reason I didn’t specify is because I feel like people just want to know what the label is. And for me, in particular, the point of Pride month is not to just be labeled. It’s to accept you for you, to be happy and prideful with who you are. I felt like I didn’t need a label.

A few weeks later you and Diamante went public with your relationship. What led you both to that decision and what was it like in the lead-up to such a life-changing announcement?

Weeks later, me and Diamante were talking. We’d been together for a few months and we had always talked about if the time was right because this is such a big thing. Especially in the wrestling world. It’s very, very rare, especially for two women wrestlers to be together. We knew the impact that it would have on the wrestling community so we wanted it to be the right time.

It’s funny. I actually decided I wanted to make the post very randomly. The few days leading up to it, me and her were really lovey. She was just giving me so much love and I just felt it. I felt it in my soul like it was the right time. I was at a Windsor, Ontario impact taping, in the Knockouts locker room and I turned to Tessa [Blanchard] and I was like, “I think I’m gonna make that post.” She said, “What post?” I was like, “THE post,” and she was like, “No, you’re not!” Her and Jordynne Grace sat down with me while I wrote it and proofread it for me. They edited all of my pictures and, when it was time to do it, Tessa was like, “Press the button! Press the button!” My Knockouts division sisters are the best people in the world. They are my family. I love them to the moon and back.

How did it feel after pressing the button?

We were all crying. It was so emotional just to have the support of my sisters and the support of my roster. I went out in the hallway and people were saying, “Congratulations.” My peers and my friends and people were just so supportive. It was just beautiful. Diamante didn’t know that I was going to post it. I just said “I think I’m going to post about us” and she’s said “Okay, go ahead.” She didn’t care because we didn’t care. And her phone just start going off. She started shaking and got super emotional. I’ve been open about my relationship to an extent, but she has never talked about her personal life on social media. Nobody knew her relationship status or sexuality. For us to come out together, it’s almost like we’re both coming out of our shells. And people are finally seeing us for who we really are.

When I’m with you, I act different. In a good way. I smile more and I laugh more. I don’t have to pretend everything is ok when it’s really not. With you, I can drop the fake smile and put on a real one. I don’t feel hurt and alone when I’m with you. You’re easy to talk to, you listen to me, you understand me. I don’t have to worry about holding back with you. I don’t feel self conscious. I don’t ever feel insecure or sad, you show me that you really do care. With you it’s not just an act. You bring out my best self and I really appreciate your company. With you I’m different. With you I’m happy. What I have with you, I don’t want that with anyone else.

So you and Diamante will be working together on season 2 of WOW Women of Wrestling.

Yes, me and Diamante, who is now Adrenaline. We are Fire and Adrenaline, which is awesome. I think that’s perfect because when she’s on, she’s on. Adrenaline couldn’t have gone to a more perfect person. I think people are very excited to see Diamante back on TV and I’m really excited to be able to share that with her.

Is there a message that you want fans, LGBTQ or otherwise, to take to heart from the last few months of your life?

I literally have “Aspire to Inspire” tattooed on my arm because this month alone has shown me how big of a voice that I have. A few months ago, I literally thought my voice didn’t matter. But to come out the way that I did, and to have the platforms that I have in Impact and WOW, my voice has been able to echo to so many different people in so many different places. I’ve had people tweet me saying that they’re coming out now because of me. To even think that I’ve inspired somebody so much that they’re able to accept themselves for who they are. I get so tongue tied. All I’ve ever wanted to do was inspire people the way I’ve had so many people inspire me. I’m so blessed with the life that I have and I want to use my voice in a positive light.

Catch Kiera and the rest of the Knockouts division on Impact Wrestling every Friday at 10pm EST on the Pursuit Channel and Twitch.

Fans can also watch the happy couple on Saturdays when season two of WOW Women of Wrestling premieres September 7 on AXS TV.