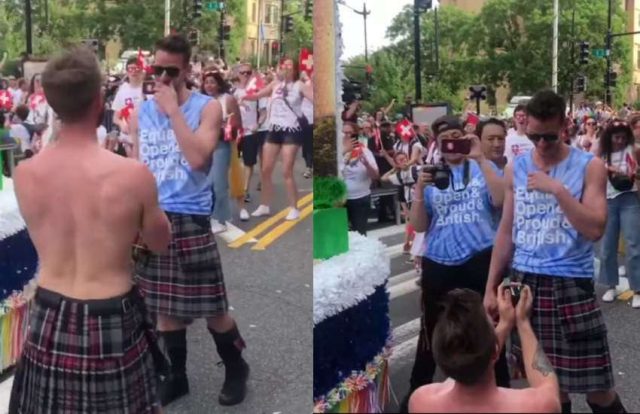 What is a Pride without an emotional wedding proposal? Capital Pride 2019 saw 30-year-old yoga teacher and YouTube sensation Finlay Wilson get down on one knee — and not for an asana this time around.

The Pride in DC took place yesterday (8 June). The theme for this year was Past, Present and Proud, reflecting back on 50 years ever since the Stonewall riots.

Wilson, sporting a kilt, popped the question to his long-term boyfriend Alan Lambie. Lambie, who was also wearing the traditional Scottish tartan outfit, is a yogi and dancer.

‘Alan, ever since we met, you’ve been doing everything to make me a better person,’ Wilson said.

‘And I have a very important question for you,’ he continued, before jumping down Britain’s float and popping the question.

The parade went ahead amid safety concerns. Several people have been injured after fleeing noises which were mistaken for gunshots.

Police said they were called to the scene amid reports of a man with a gun. When they arrived people were fleeing the area and reported hearing gunfire.

However, authorities said there was no evidence that any shots were fired. Police are investigating the cause of the noise.