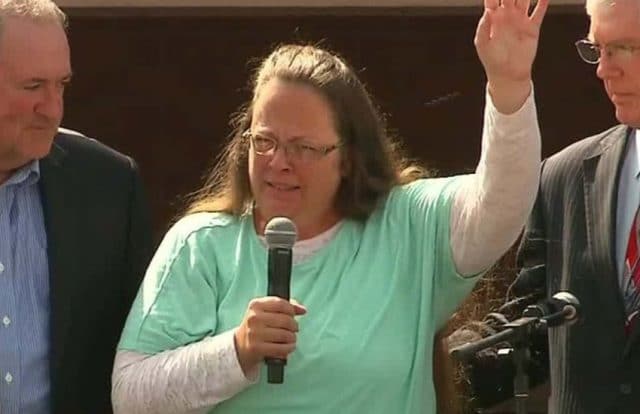 Davis said she was acting on God’s authority and did five days of jail time for her refusal to sign the marriage licenses.

Now Davis is in Romania seeking to persuade voters to ban same-sex marriage there.

LGBTQ Nation reports Davis is in the Eastern European nation with Harry Mihet, the vice president of legal affairs and chief litigation counsel for the Orlando-based Liberty Counsel, an anti-LGBTI legal group.

Davis and Mihet are on a nine-day tour of the country of 20 million people, meeting with Romanian Orthodox Church officials as well as government and local leaders.

The Romanian constitution currently defines marriage as between ‘two spouses,’ but Davis and Mihet are trying to get it changed to read ‘a man and a woman.’

Romanian law allows the constitution to be changed if at least 500,000 people sign a petition demanding a referendum.

The Coalition for Family, a group of 30 non-governmental organizations which back anti-LGBT policies to ‘promote the traditional family,’ has collected over three million signatures.
That petition has been certified and now awaits approval by the Senate. Proponents hope for a vote sometime this fall.

The Washington Blade notes that Romanian law currently bans gays and lesbians from legally marrying, but it does not ban civil partnerships between same-sex or opposite-sex couples.

Homosexuality was decriminalized in Romania in 2001, but no protections for LGBTI people have been enacted since that time.

Davis and Mihet are doing numerous interviews and public appearances. They are pointing to Davis’ jail sentence as a warning that allowing same-sex marriage will bring back Communist era bans on religion.

‘Their message is simple and based upon the recent lessons learned in the United States: same-sex “marriage” and freedom of conscience are mutually exclusive, because those who promote the former have zero tolerance for the latter,’ the Liberty Council press release said.

Mihet, who was born and grew up in Romania, said he was proud to introduce Davis to the Romanian people.

‘Her story resonates loudly with them, and they are receiving her tearfully and very warmly, because they can still remember the not-so-long-ago days when they were themselves persecuted and imprisoned for their conscience,’ said Mihet in a Liberty Council press release.

‘The freedom of conscience transcends national, cultural, religious and denominational lines, and Romanians are determined to prevent such injustice from ever happening again in their country.’