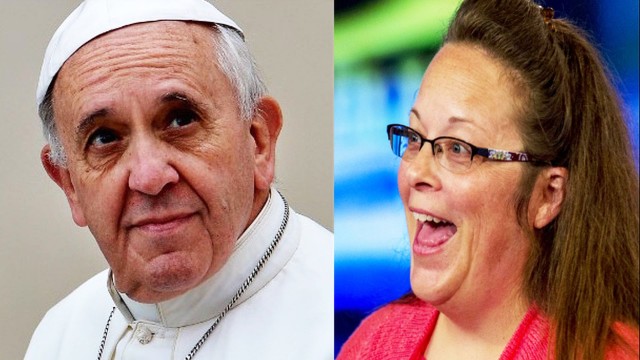 Kim Davis refuses to leave the spotlight and her story is now famous all over the world. But here is Kim Davis scoring another first in the unraveling of the events that followed her refuse to issue marriage licenses to gay couples some time ago. It turns out that Pope Francis himself met with Kim Davis in private, away from Press’s eyes, last Thursday. “The fact that he met with Kim Davis sends a message that he is someone who stands with those individuals who are standing on their religious convictions” Davis’s attorney stated. He also added that the meeting lasted under 15 minutes and that during the meeting the Pope thanked her for the courage showed in standing up to what she believed in. At the end the Pope gave Davis and her catholic family two rosaries. The fact that the meeting took place in secret it is a common practice that the Pope uses when it comes to some of the most controversial meetings, as the one involving Davis. The reason for that was avoiding a lot of questions unrelated to the actual purpose of his visit to the US which was supporting the public consciousness and offering aid and assistance in the religious topic. Regarding the Kim Davis issue and the recent events which took place in Kentucky, Terry Moran, an ABC News reporter, asked Francis: “Holy Father, do you support those individuals, including government officials, who say they cannot in good conscience, their own personal conscience, abide by some laws or discharge their duties as government officials, for example in issuing marriage licenses to same sex couples. Do you support those kinds of claims of religious liberty?” The Pope’s response was: “I can say the conscientious objection is a right that is a part of every human right. It is a human right and if a government official is a human person, he has that right. It is a human right” This statement, as well as his open vote in favor of Kim Davis, worry those considering Pope Francis a supporter of the LGBT community. Back in 2013, Pope Francis stated: “If someone is gay and searches for the Lord and has good will, who am I to judge?” This is, of course, a great leap from Pope Benedict’s “Gays are objectively disordered” or John Paul II’s claim “Homosexual acts are against natural law” however, it still seems to link the redemption of the gay individual to the necessity of assuming religious beliefs.

It seems like Kim Davis still causes some waves in the media and things are far from over.