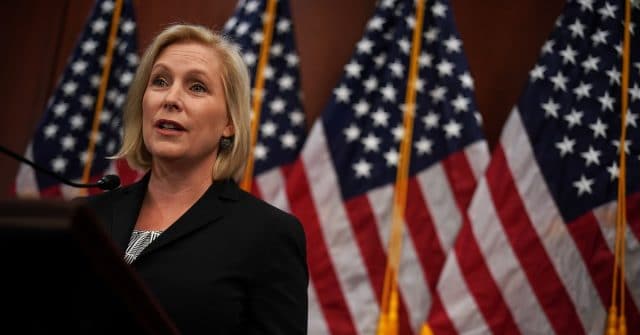 The US senator, who has a strong pro-LGBT record as a lawmaker, set out one of the most radical platforms on LGBT+ issues in the Democratic primaries to mark the start of Pride Month on Saturday (June 1), pledging to ban conversion therapy, outlaw anti-LGBT discrimination and recognise a legal third gender option on official documents.

In a blog post, she explained: “As president, I would undo Trump’s harmful policies and defend the civil rights of LGBTQ Americans. And I’ll push for proactive policies to ensure all Americans can live free from discrimination and bigotry based on their gender identity or sexual orientation.”

In the plan, Gillibrand said she would federally recognise a legal third gender option, creating an ‘X’ field on identification documents for people who don’t identify as male or female.

The candidate would also roll out new birth certificates, replacing “mother” and “father” with gender-neutral language “to ensure that both members of a same-sex couple can secure their parental rights from the day their child is born.”

The New York politician also promised to “enact a nationwide ban on conversion therapy” describing it as a “despicable, torturous practice.”

Gillibrand would also instruct the Department of Justice to track and prosecute hate crimes against LGBT+ people and people of colour.

The plan also includes pledges to “ensure that asylum claims of LGBTQ people fleeing persecution are recognised so that they may reach safety” and to “stand up to any country and leader who allows the persecution of LGBTQ people.”

The candidate also vowed to “direct my Department of Justice to consider gender identity and sexual orientation a protected class to prevent discrimination in any area of public life,” even if Congress fails to pass the Equality Act to legally outlaw discrimination.

Gillibrand added: “Here’s my biggest commitment of all: I won’t stop at the policies I’ve outlined today when it comes to fighting for LGBTQ families and individuals.

“The LGBTQ community is not a monolith with a finite set of needs, and equal rights and freedom from discrimination should be the bare minimum we accept.

“LGBTQ people deserve to live, work, raise families, and succeed just like anyone else — and LGBTQ kids deserve to grow up in a country that supports and encourages them. I’ll fight for them and their futures fiercely, just like I’d fight for my own family.

“As president, I will do more than defend LGBTQ rights — I will stand shoulder to shoulder with the LGBTQ community in the fight for equality.

“We’re in this together, because LGBTQ rights are human rights. And we will fight for them.”