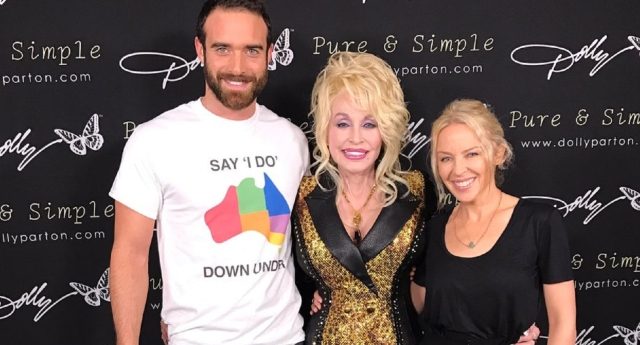 Kylie Minogue and Dolly Parton have backed a campaign calling for equal marriage in Australia.

Equal marriage in Australia is at risk of being shot down, after Prime Minister Malcolm Turnbull failed to agree a compromise deal with opposition parties.

Mr Turnbull wants to put the issue at a public vote at a cost of $200 million, but opponents say the move is unnecessary and expensive, when a measure could simply be passed in Parliament.

Ahead of a showdown on the issue this month, a range of stars have backed the Say I Do Down Under campaign.

Heading the pack is Australian gay icon Kylie Minogue, who has been vocal in support online of the campaign, which just so happens to be headed by her fiance Joshua Sasse.

Sasse wrote: “Have you ever been in love? Are you in love? Could you imagine yourself there one day?

“Imagine too then, having your government deny you that right — what if you couldn’t marry that person. Your person.

“I was shocked to find out earlier this year that same-sex marriage in Australia is still illegal. There are many hurdles to jump in order to make constitutional change, but we are now the closest we’ve ever been to that change.

“Let’s raise our voice and public support for change. Get a shirt. Wear your heart on your sleeve. Support Australians 4 Equality, a coalition of organisations working to deliver a winning campaign so we can legalize all love in this country and SAY ‘I DO’ DOWN UNDER.”

Minogue tweeted: “Please one and all retweet and spread the love!!! #sayidodownunder

#lovers!! ARE YOU WITH US at @SayIDoDownUnder yet? #follow ? #loveislove @joshuasasse ?

“#lovers!! ARE YOU WITH US at @SayIDoDownUnder yet? #loveislove”.

Others to back the campaign include Suicide Squad star Margot Robbie, Jake Shears of the Scissor Sisters, and actress Kelly Ripa.

Minogue previously explained her fiance’s passion for the issue, saying: “He’s so adamant to fight for gay rights in Australia and it’s coming from the most genuine place.

“He just can’t fathom that same-sex marriage hasn’t been legalised and of course I back him up on that, we are waiting for it to happen.”

Earlier this year, Kylie made an unforgettable appearance on Sasse’s musical TV show Galavant, where she was the ‘Queen of Gay Bars’.